Traveling abroad in Hindi films — The Nervousness of the Global Indian 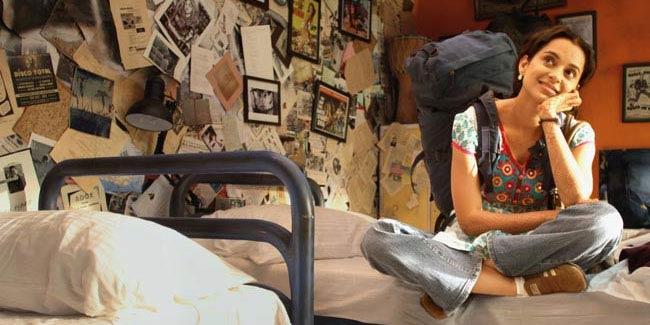 Hindi films about Indians traveling abroad have captured the imagination of the audience – if the successes of  Zindagi Na Milegi Dobara, Yeh Jawaani Hai Deewani and Queen are any indication. These films are targeted at metropolitan/ multiplex audiences, those likely to be more aligned with the global world than with rural India which is only a few hundred kilometers away. These films appear to celebrate the newly found boldness of the global Indian, his/her willingness to take chances and seek out risky occupations/ ways of life. Until a little more than half a century ago crossing the seas was almost taboo for Indians, but this has apparently changed forever. Traveling abroad is now presented as emblematic of acquiring boldness and becoming independent- an implication found in all the three films cited above. Still, a closer examination of the new films has us wondering about the extent of the acquired boldness.

In Yeh Jawaani Hai Deewani, for instance, the male protagonist Bunny – who is fiercely protective of his independence – is a globetrotting photojournalist and one would expect a person of his ilk to be where the action is – in Sudan, Syria or Ukraine. What Bunny does instead is to hang out in Paris where the tourists gather and take pictures of skateboarding youth on the city’s pavements. But the acts by which global Indians from cinema show genuine audacity is in spending money and the example of icons like Lakshmi Mittal may have helped inspire them. Cost is never a consideration although most travelers know that London and Paris – where the global Indian mainly registers his/her presence – are among the most exorbitant of cities.

Queen is structured like a road movie and road movies are about travels on which people change and/or grow up in some sense… The problem is that Rani behaves less as a traveler than a tourist, and tourism does not spell ‘independence’.

In Queen traveling abroad becomes the central metaphor for a young woman dumped by her fiancé on the eve of her wedding to demonstrate her independence. Rani and Vijay had been planning to go on their honeymoon to Paris and Rani decides to go alone – despite the comforting presence of a husband not being available. The film begins with preparations being made for the wedding – Rani (Kangana Ranaut) being suitably attired and prepared for the gala event, but it still makes certain that there are few surprises. Vijay is made an unprepossessing young man, as if to prepare us for the break-up. Having an attractive groom might have romantically inclined audiences pairing the two off in their minds and then feeling let down, and this is being prevented. Rani is from a reasonably well-off business family and Vijay’s parents are known to her father but no convincing reason is provided either for why/how the rat-faced Vijay should/could dump someone as gorgeous as she is or for why Rani should be so smitten by the prospect of marrying him. She may be from a conservative family but she studies in a Delhi college and she must surely have received male attention.

Queen is structured like a road movie and road movies are about travels on which people change and/or grow up in some sense. But the problem with it is its ‘grammar’ – its adopting the passive voice as it were. Rani wanting to travel on her own to Europe means that she is a strong-willed person who is intent on discovering herself because it is her dependence on other people for her happiness which has brought her grief. Anyone traveling on his/her own to a strange country – especially one not used to traveling internationally – would try to find out about the city she is traveling to, how one gets around in it and what things cost. If one is traveling to assert one’s independence, what better way than to explore? Rani would need to consult maps and guidebooks and if Vikas Bahl had paid attention to the actual conditions of travel he would not have simply deposited her at her final destination – which is her hotel. Although an actual traveler with money might choose to get around by taxi, a filmmaker showing an inexperienced person arriving in a strange city would also do well to include a metro ride from the airport on which the protagonist would see unexpected things.

The problem is that Rani behaves less as a traveler than a tourist, and tourism does not spell ‘independence’. Indians don’t usually make inquisitive travelers and I was once a judge in a travel writing competition in which a short-listed contestant was so besotted with his own grandchild in the back seat of his car that he neglected to look out of his window, and therefore saw little worth describing. Rani is much like that and, predictably enough, the film provides her with the comforting presence of a part-Indian woman named Vijayalakshmi. Perhaps sensing that this reassurance would not be enough for the audience, the film adds a loud musical soundtrack – full of the canine howling that passes for singing in Hindi cinema today, and the sounds and noises that one might find captivating in a new city are shut ruthlessly out. Rani stays for an indefinite period in Paris but all she sees are the sights that any tourist brochure offers – the Seine, Montmartre, The Eifel Tower, the Champs-Élysées along with a few parties attended with Vijayalakshmi during which she meets no person of any interest but dances with abandon.

From Paris, Rani travels by train to Amsterdam – that other comforting European city for Indian tourists. Rani has handed her a gift to be passed on to a woman friend – a cheerful prostitute who speaks a little Hindi. Rani also makes three male friends in a hostel – Olik who is Ukranian, an African and a Japanese survivor of the tsunami named Taka, who form a chaste community around her. Mildly amusing is a visit to a sex shop in which Rani demonstrates her naiveté. The highpoint of this section of the film is her dealing with an Italian cook/waiter whom she kisses; still, a kiss from a seedy Italian waiter in Rome is routinely included as a ‘special’ by tour operators. Considering the amount of time Rani spends in Europe, it is significant that there is not one story that she gets from people which might have shed light on other parts of the globe. Much more attention is given to her memories of India, Vijay, her family, her grossly overweight kid brother and interminable Skype interludes.

It is as though the three men with her were not sexual beings at all and only an Indian man – even one who has brutally hurt her – could be imagined as a sexual partner at all. Vikas Bahl has made Vijay thoroughly dislikable and there is no way that we in the audience can see him as a suitable match for someone played by Kangana Ranaut.

After all the rhetoric around freedom and the good things of the world duly tasted by Rani, it is strange that she should hesitate so much when Rat-Face catches up with her in Amsterdam. It is as though the three men with her were not sexual beings at all and only an Indian man – even one who has brutally hurt her – could be imagined as a sexual partner at all. Vikas Bahl has made Vijay thoroughly dislikable and there is no way that we in the audience can see him as a suitable match for someone played by Kangana Ranaut. Still, Rani hesitates much more than someone wronged by him should and listens to his hypocritical pleas of true love even as we sit in the dark grinding our teeth. I suspect that this conclusion owes to the director not being sure of his audience. There might be people sitting in a khap panchayat somewhere who would still want Rani to marry Vijay, and they need convincing. It is perhaps this factor which eventually makes Queena very conservative film. Despite its siding with feminine independence, it submits to the khap mentality. Given this scenario, one wonders if elements of such a mentality are not deeply embedded in the global Indian and if it is not these elements which make him/her acutely uncomfortable outside home. Shopping and spending are perhaps essentially nervous safeguards against the cold loneliness of a strange new world – in which ready communities are not found as easily as Queen would have us believe.