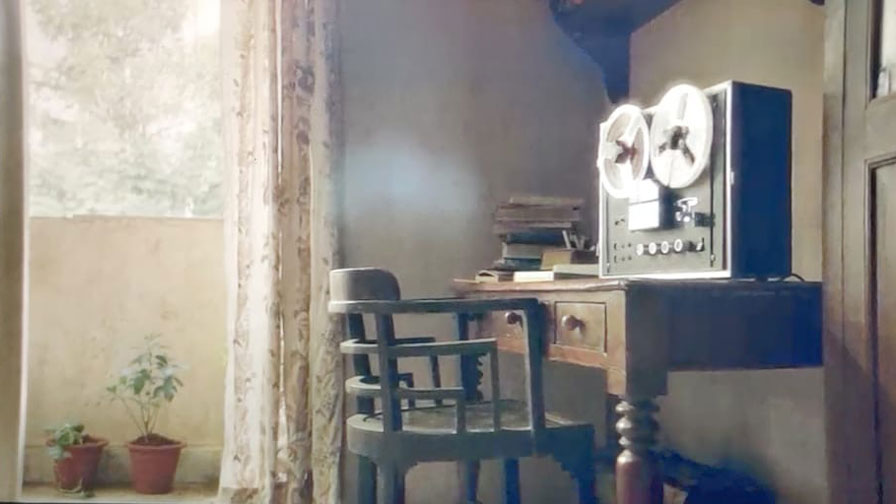 A tragedy in three parts, each separated by prolonged blackouts, The Disciple takes shape using the Indian classical music fraternity as one big metaphor to demonstrate how in today’s world of self-promotion and exaggerated marketing, degradation has occurred in almost every field, and how our blinded attitudes are responsible for the distortion of many of our long-standing, cherished values; politics and the social fabric being classic examples of such deformations.

This is a story of three ordinary singers, the protagonist Sharad Nerulkar (Aditya Modak) and his Guruji and father. Three men belonging to almost three different generations and who chance to be in the field of music. The protagonist is highly fascinated by, and wishes to live his life holding on to, an ideal — the secretly-taped philosophical discourses of a mystic singer, MAI, whose singing almost nobody existing today has ever heard. On being questioned about the kind of songs that MAI sang, Sharad’s father replies, “It cannot be described”; an answer that displays the level of unfortunate ignorance. Despite the protagonist’s desire for purity, though, he is compelled to make compromises at a performance sponsored by a wealthy builder; a similar attitude is also noticed in the other two.

In the contemporary world, the entirety /the purity /the sacrifice /the ideologies that MAI talks about have turned out to be mere words only worth listening to. One can ride high on those intoxicating words, dazzled by the brightness of it all, but only momentarily. Just as how the protagonist, wearing his earphones, shuts out all surrounding noises and moves in slow motion — lost within — but is jolted back to his senses on listening to MAI’s words, “It takes courage to face the truth, because the truth is often ugly.” Those words compel him to pull off his earphones, and as soon as he does so, he suddenly realizes the actuality of the motion, the noises, and the practicality of the situations that surround him.

Over time, a lot starts becoming extinct within the protagonist. When on the day of MAI’s birth anniversary, Guruji is unable to sing up to the mark (Guruji is unable to strike the right chord), the protagonist is reminded of his meeting with a critic. Angered at the critic’s views he had then splashed water at his face. But now, while Listening to his Guruji’s flawed live performance, the truth appears to dawn upon him and he becomes aware of a different reality. Later, he gives Guruji a bath, and as he dresses him up one gets a feeling that he is covering Guruji in a kafan(a death robe). One cannot stop from noticing that something within the protagonist, something very dear to him, is dying.

The Disciple poses the question of who should be held more responsible for the degradation of values — the audiences who come to concert halls reminiscing the taste of vada pav (a popular Indian junk food) and/or because the weather conditions seem favorable, or the classical musicians themselves who present their art to their audience with a non-committal attitude?

The film also makes a commentary on the fate of Classical Art falling prey in these modern times to the gigantic demons of Promotion & Marketing, and likens it to a case of mob lynching — a humble participant enters a substandard popular music show and wows the judges with a Hindustani Classical Music rendering, but by the time she reaches the final round, her attire and attitude are grossly westernized, and her face is hidden behind layers of gaudy makeup; it almost appears as if she is being lynched by the talent program.

A heartbreaking remnant of the teachings passed on from one generation to the other is displayed when the protagonist is seen teaching his daughter to catch hold of something distant, in a pinch. When a folk singer sings out the truth about how we who have evolved through indigenous traditions have today become alienated and flawed and thus turn a blind eye, the protagonist pretends not to see or hear him. And the film ends. Tamhane strongly brings upon us the realization of the losses we have suffered over the declivity of disciples through several generations.

See also — an analysis of The Disciple by Oorvazi Irani

The Disciple — a Love Story of the Artist and his Art

Dnyanesh Moghe is a film critic, film academician, film director/producer, theatre actor/director, and former committee-member/curator of the Goa Marathi Film Festival (GMFF). His plays have won numerous awards. His film Digant was nominated at IFFI and MAMI, and played on Doordarshan for 3 years. He has served thrice on the jury of the Kolhapur International Film Festival and twice on the jury of the National Film Awards. Presently, he is on the Mumbai censor board, and is an executive member of the Entertainment Society of Goa (ESG) and the Goa chapter of the Indian Council for Cultural Relations (ICCR, Govt. of India).