Face to face — the cinema of Adoor Gopalakrishnan 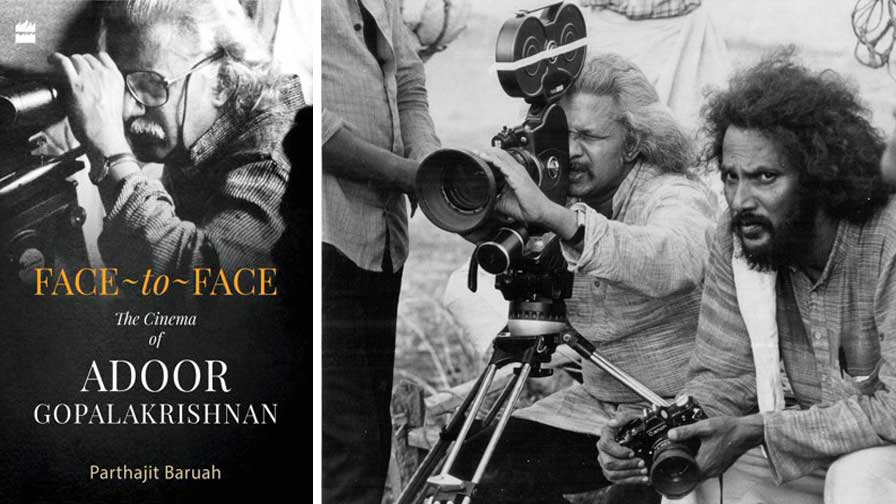 That reviewer Parthajit Baruah is well read, as professors of English (and cinema) should be, is clear from the number of references to literature as well as quotes from books that he uses in ‘Face to Face – The Cinema of Adoor Gopalakrishnan’ to illustrate his points. That he is completely cued in to the films of Adoor Gopalakrishnan is equally obvious in the meticulous way he has handled the subject of his book and quoted extensively from reviews and from interviews the director has given to media over the years. Baruah has taken pains to ensure that through this book he will motivate even those who have never watched a film by Adoor Gopalakrishnan to not only understand the latter’s approach to cinema but also find themselves wishing to see the director’s work.

The introductory chapters of the book delineate the “major political, social and cultural landscapes that inform his films.” This I believe is quite necessary in a country in which, increasingly, divisions between states, regions and cultural and religious beliefs are getting deeper as people draw tight the strings of their identities to exclude others. Baruah talks about the natural beauty of Kerala, its art forms like leather puppetry, which combined craft with vocal drama to anticipate cinema, and its performing art disciplines like Koothu and Kathakali, which together worked their influence on the work of Adoor Gopalakrishnan. He explains the almost defunct matrilineal system, which is significant as the director draws from it for some of his films. Giving examples, Baruah shows how the political and social evolution of Kerala plays into the choice of themes and characters in Adoor’s films.

Interesting observations make what could have been merely academic writing dynamic.

In his chapter on stereotypes, Baruah puts out stories of directors across the country, from Phalke in Maharastra to Jyoti Prasad Agarwala in Assam searching for the right ‘heroine’ for their films. While Raja Harishchandra had a male Taramati, Agarwala’s search for an actress for his debut film would win him the dubious title of ‘thief of girls’ and much abuse from the villages he visited during his search. Baruah also compares the treatment of women in Hollywood to those in the Hindi films of Shyam Benegal, and then moves to Adoor Gopalakrishnan’s exploration “of the world of women to understand their position within the socio-economic set up.” Thus, making them more than mere “objects of the male gaze.” The author gives examples of the women characters in the films, explaining what the director was portraying through them. And it is here that the book has its one fault, for much of what is said about the characters and themes is retold, almost verbatim, when the films they are part of are discussed, leading to an unnecessary repetition.

Invaluable observations that a first time watcher of Adoor’s films may miss are highlighted in the chapter on the director’s approach. The use of sound, the lack of background music, which is substituted with natural sounds recorded painstakingly in his second film, Kodiyettam, and the use of music as a leitmotif in films like Elippathayam, where music draws the parallel between the inmates of a house lost in time to the rats who coexist in the living spaces, are cases in point.

Perhaps the most important chapter in the understanding of the filmmaker’s thought and approach to cinema is the Back Story, where through a biographical lens, Baruah portrays the many influences on his subject, often quoting from the interviews Adoor has given through the years. Of special relevance here are Adoor’s reflections on what he, as a student at FTII, gained due to his fortune of being able to interact and learn from Ritwik Ghatak, who was then the vice principal and a professor in the direction department, and from Satish Bahadur, the legendary teacher of film appreciation. Later, Adoor too would serve as a chairman of the FTII Governing Council, for two separate terms. Baruah ends the chapter with a glimpse into the director’s home, built painstakingly with wood he claimed and restored from a 200-year-old house, so it would look natural and real. Much like the way Adoor worked on his films.

The remainder of the book deals with the films, and their unique differences one from the other, and in the process, the book traces the development and growth of the maker’s artistic and creative genius that would place him among the cinematic greats of the world. The inclusion of two of the FTII films by the director, which feature students like Asrani and Sudharani Sharma (who would later act in Do Dooni Char), is an interesting aside. And an extensive interview with Adoor Gopalakrishnan at the end of the book nicely ties up this wonderful treatise by letting us learn from the creator himself what he wished to say through his work in celluloid.

A book for students of cinema and anyone who loves good films, perhaps it will encourage the re-release of Adoor Gopalakrishnan’s films with subtitles, so a wider audience can view and appreciate them. In his films lie a window to a greater understanding of the Indian psyche, which, thanks to this book, might be opened wider.

Sathya Saran is a consulting editor with Penguin Random House, and teaches fashion journalism at NIFT. Prior to this, she was a consulting editor with HarperCollins India. Additionally, she is the author of biographies of Hariprasad Chaurasia, Guru Dutt, Jagjit Singh, and S.D. Burman; the winner of the Roshni TIA Inspirational Woman Award 2018; and the former editor, for 12 years, of Femina | https://penguin.co.in/book_author/sathya-saran/