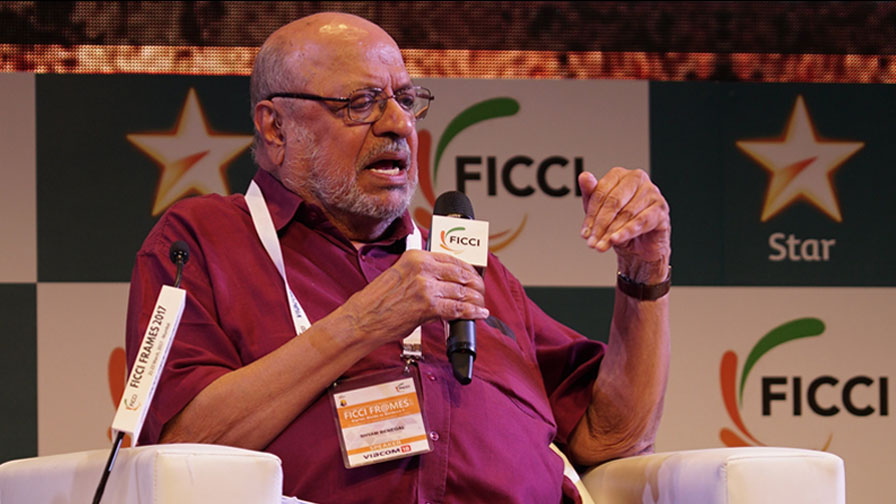 “Weave a circle around him thrice,

And close your eyes with holy dread,

For he on honey-dew hath fed,

And drunk the milk of Paradise.”

The most endearing aspect of Shyam Benegal as an individual and a director is his unassuming demeanour. He is an ‘author’ without being authoritarian. His seemingly ordinary way of bearing himself simply belies his strength to give sustenance to the universe of stories that he carries within him. This facet of Benegal starkly contradicts the commonly perceived image of directors; that they are inseparable from their inherent authorship even while they are not all the time conscious of it.

What makes Shyam Benegal stand out is his turning away from the author’s persona as described by Roland Barthes; an “author” who is keener on ‘seeing’ things as they happen than on ‘showing’ them from the central perspective of a manipulating agent. This ‘author’ contradicts the auteur who emerged in the 1950s new wave cinema as the sole controlling figure. To be more precise, Benegal prefers to be among the anonymous audience rather than donning the role of a puppeteer who holds the strings and fastens the story to his fingers. For Benegal, the self-effacing author, the story unfolds itself, and speaks for itself.

In the conventional notion, an artist /author is synonymous with a creator, an inspired being—one who drinks the milk of Paradise, is guided by the “Heav’nly muse” (John Milton, Paradise Lost), sees things that others fail to, and is capable of creating life with masterstrokes. However, in the 1960s, this notion was radically replaced with the notion that the author is only a ‘translator’ and not a creator. This new incarnation or role of the “author” was ushered into the arena of critical theory by Roland Barthes in his path breaking essay ‘The Death of the Author’, in which he says that the author is merely the facilitator, the mediator or simply the ‘space’ where currents and cross currents of socio-cultural happenings cross their paths.

No doubt it has always been that way. As soon as a fact is narrated no longer with a view to acting directly on reality, but intransitively, that is to say, finally outside of any function other than that of the very practice of the symbol itself, this disconnection occurs, the voice loses its origin, the author enters into his own death, writing begins. The sense of this phenomenon, however, has varied; in ethnographic societies the responsibility for a narrative is never assumed by a person but by a mediator, shaman or a relator whose ‘performance’—the mastery of the narrative code—may possibly be admired but never his ‘genius’. (Roland Barthes)1

In a similar manner, John Barth takes a survey of art forms and genres such as music, painting, pop art, intermedia art, and literature, and proposes that all art is repetitive by nature and that the ‘authors’, instead of creating, merely synthesize what went past and what they see around them in the present. Benegal, in spite of possessing a widely acclaimed oeuvre, appears not to believe in this proposed ‘myth’ of originality, in which the Aristotelian conscious agent is an “aristocratic notion” of which “the democratic West seems eager to have done with, not only the “omniscient” author of older fiction, but the very idea of the controlling artist has been condemned as politically reactionary, authoritarian, even fascist.”2

Benegal is said to have set out under the influence of Satyajit Ray, but his films are a class apart from Ray’s, for, unlike Ray, Benegal in his depiction of social realism prefers to be less suggestive and more straightforward, less dreamy and more harsh, raw and lifelike. Whether in his early films such as Ankur, Manthan, Bhumika, Mandi, and Junoon, or in his later films such as Mammo and Zubeidaa, he captures the political undercurrent that flows through all social relationships. Survival and self-fulfillment of individuals caught between the expectations of the society and their own, are the core issues that Benegal addresses in his movies that move in the domains of class/caste struggle, gender politics, psychic obsession, history and cultural anthropology.

In real life too, as in his films, there is no attempt to mystify or romanticize reality. While reflecting on his own works, Shyam Benegal assumes the ‘role’ of anything but the director that radiates a towering, all eclipsing and an all-knowing halo. He is careful not to let the author’s self take over his common man’s way of sitting relaxedly while talking. Even while giving background details of threshold moments, Benegal appears like one recounting the most mundane, ordinary happenings in the chain of everyday incidents of which we barely take any notice. In his description there is neither any trace of anxiety of searching nor the thrill of finding. Shyam Benegal is placidity personified.