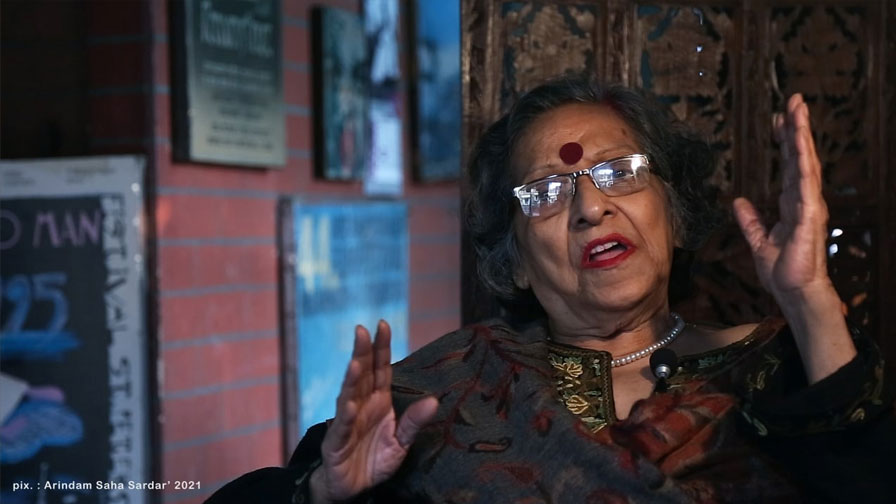 What is the role that women play in Hindi cinema and has it changed over the years?

Women have mainly played decorative objects in Hindi cinema for a long time. Or, even in films where they had important roles, they are more victims and martyrs or victimizers of other women. Rarely have films like Kunku presented women as strong women who can raise their voice against injustice, who can rebel in their own way and make their own political statement.

Each decade has presented its own brand of women in Hindi cinema. Mother India is a strong political statement on a woman who can do anything to establish that justice has been done even while remaining within the framework of marriage and motherhood. She defies the micro state of being a biological mother in order to fit into the framework of becoming the mother of the nation when she shoots down her own son to save the honour of a woman of the village.

The ordinary woman has hardly been visible in Hindi cinema. During the time of Meena Kumari, Madhubala and their peers, the camera focussed more on the face of the leading lady than on the body. This changed radically from the 1990s when the body of the heroine became as or more important than the face. The sati-savitri image underwent a radical make-over probably with Nutan, who, without showing skin, made a powerful presentation in strong roles such as Seema and Bandini. Geeta Bali promoted the image of a mischievous tomboy, also a positive deviation from the sati-savitri image.

One thing noticed in Hindi cinema is that like Hollywood, the actresses have often indirectly dictated the terms of these portrayals such as Meena Kumari as the tragedienne, Vyjayantimala as largely decorative but a very good dancer, Madhubala for her beauty, and so on. Waheeda Rehman was a powerful actress who blended her dancing beautifully with roles where she could rise above the decorative quality of the characters.

Sharmila Tagore, Asha Parekh and Sadhana defined a change in fashion and style more than change in characterization. They played stereotypical roles in mainstream Hindi cinema wearing big bouffant hairdos, short, skin-tight salwar kameezes and did little more than flutter their false eyelashes at the hero and dance around trees with him.

Jaya Bachchan, Smita Patil and Shabana Azmi stripped glamour off the female lead’s character and played roles that were as important as that of the hero. They were not commercially successful but did very good roles in whichever commercial film they acted in such as Kora Kagaz, Jawani Diwani, Guddi, Rampur Ka Laxman, Sholay (Jaya Bachchan), or Namak Halal, Arth and Shakti (Smita Patil), Karm, Arth, (Shabana Azmi).

Hema Malini defined her own space and dominated the scene with one film after another just through the power of her beauty, her graceful dancing talents and her ability to bring off a hit with any hero ranging from Jeetendra to Rajesh Khanna to Sanjeev Kumar through Dharmenda to Dev Anand. But she could hardly act and it needed a very good director like Ramesh Sippy to bring good performances out of her such as she did I Seeta aur Geeta and Sholay and again, as Meera under the directorial baton of Gulzar. She ruled the heroine batch for nearly two decades. Zeenat  Aman who was pulled in by her beauty queen image, could do nothing to change the portrayal of the Hindi heroine in any way and there were many like her such a Reena Roy, Farah, Neelam, and others.

From Rekha followed by Madhuri Dixit and Karisma Kapoor, the woman in Hindi films became louder in every sense – voice, articulation and delivery of dialogue, sexual aggressiveness and terms of character. This trend continues in a much more aggressive way carried forward in its well-packaged globalized image by the present crop comprised of Aishwarya Rai, Preity Zinta, Priyanka Chopra, Kareena Kapoor, Rani Mukherjee, Kajol and so on. They just do not agree to play complacent sugar syrupy characters who are expected to flutter their eyelashes and turn into glycerine factories at the wave of the director’s hand. Madhuri was decorative to begin with but changed over slowly and steadily with Tezaab followed by films like Beta, Dil, Dilwale Dulhaniya Le Jayenge culminating in Mrityudand.

Actresses like Vidya Balan, Tabu have struck a balance between glamour and convention helped by their looks and the image they present. The woman is stronger, almost equal to a man in current films such as Dhoom, Dhoom II, Shaurya, Aitraazwhere there is almost no difference between the heroine and the vamp because all the female stars are willing to step into negative roles if they are strong and can make a lasting impression on the audience.

Into the 2000 however, one is constrained to point out that most of the high-budget Hindi films that rely greatly on direct marketing by the stars, are either blatant or clever remakes of Hollywood films, both hits and flops. Thus the portrayal of the woman is also a ‘borrowed’ portrayal that is greatly distanced from the Indian woman on the street, urban or rural, educated or not educated, working or non-working and so on. Ethical values have changed to a large extent too because premarital sex, adultery, sexual overtures where the woman takes the initiative are quite common and have also got audience acceptance. Otherwise films like Astitva and Gangster and  Jism and actresses like Bipasha Basu and Kangna Ranaut would never have clicked the way they have.

From the point of view of the Feminist Film Theory, how would you analyse a female actor in Hindi cinema today?

Please refer to the introductory chapter of my book SUBJECT: CINEMA, OBJECT: WOMAN – A STUDY OF THE PORTRAYAL OF WOMEN IN INDIAN CINEMA, which contains a detailed analysis of which of the two Feminist schools – the American school of sociological analysis, or the British School based on psycho-analytical theory fits into the scheme of the portrayal of women in Hindi cinema. My argument is that since much of Hindi cinema is influenced by Hollywood from the mid-1950s, the feminist analysis of female characters in Hindi films would fit more into the American School than the British School of Feminist film theory. Looking back on Hindi cinema however, I feel that as an Indian critic and film analysis, we should give up the tendency to rely on Western constructs of feminist film criticism. I might add also that they are fine for (a) offering choices of alternative schools of thought, (b) guiding the process of feminist film research, (c) forming frames of reference for specific issues that are global in character such as cinematic depiction of rape, and, perhaps, (d) providing a platform for interesting and exciting comparisons between a Hollywood film and a mainstream Hindi film on the same subject.

I have realised over my years of research into the portrayal of women in Hindi cinema that these constructs, theories and perspectives can neither be directly applied to nor superimposed on Indian mainstream cinema’s treatment and portrayal of women. One has to develop a mode of analysis that is culture-specific and situation-specific. Feminist film theories that draw mainly upon psycho-analysis, semiology and structuralism do not have much bearing on an analysis of portrayals of women in Hindi cinema. So, one has to develop a new theory of such analysis against the backdrop of the Indian socio-economic backdrop within which the real woman lives and works and study the intersections of these with celluloid women in Indian cinema. How distanced are the real women from the celluloid women? Does distancing help nurture better images of the celluloid women or does it hinder the image more and thus distance the audience from these films? Globalization has changed it all and one needs to look at the woman portrayals in Hindi cinema in 2010 with new eyes and through a new pair of glasses tinted with the razzmatazz of Western packaging, sophisticated marketing strategies, the launching of music and stars taking part in reality shows to plug their about-to-be-released films.

Who is a female actor today in Bollywood that you admire, and why?

I admire most of them for their commitment, their approach to their career and their roles, their readiness to learn new skills such as fighting, riding, karate, climbing mountains and so on and their readiness to shed clothes according to the demands of the character, the film, the director, their flexibility and the power they exude by their mere presence on and off screen. They are articulate, intelligent and dynamic and hold themselves extremely well in public space and even on screen. Among the choice select, I would pick Aishwarya Rai, Kajol, Kareena Kapoor, Priyanka Chopra, Kangana Ranaut, Konkona Sharma, Bipasha Basu, Rani Mukherjee, Katrina Kaif and Preity Zinta. Sadly, the new crop of young leading ladies who make their debut opposite  heroes like Amir and Shahrukh cannot make it afterwards for some mysterious reason.

Is there any specific difference between the role that women play in Hindi cinema vs other regional Indian cinema?

Could you kindly speak about any specific contemporary Indian director who is sensitive to the portrayal of women in Indian cinema. And how does that reflect in their work and cinematic choices?

Shyam Benegal, Madhur Bhandarkar, Vishal Bharadwaj, Anurag Kashyap, Anurag Basu, Rituparno Ghosh, Sanjay Leela Bhansali, and Mahesh Manjrekar who directed Astitva. Even when they do not make films that are involved in basic gender issues and are gender-neutral in treatment and storyline and approach, they are very sensitive in their projections of the female characters in their films. Madhur Bhandarkar would come on top of this list after Benegal.

Oorvazi Irani is a film educationist, acting coach, and indie filmmaker who teaches at FTII, and Whistling Woods and heads the film subject at the SVKM JV Parekh International School. She has conducted film workshops and appreciation classes at Mumbai University, the Digital Film Academy, the Institute of Creative Excellence, the Birla Institute of Science and Technology, Prithvi Theatre, Kishore Namit Kapoor Acting Institute, and the Russian Culture Centre. She has written for film journals and textbooks. And has served on the jury of the International Children’s Film Festival.