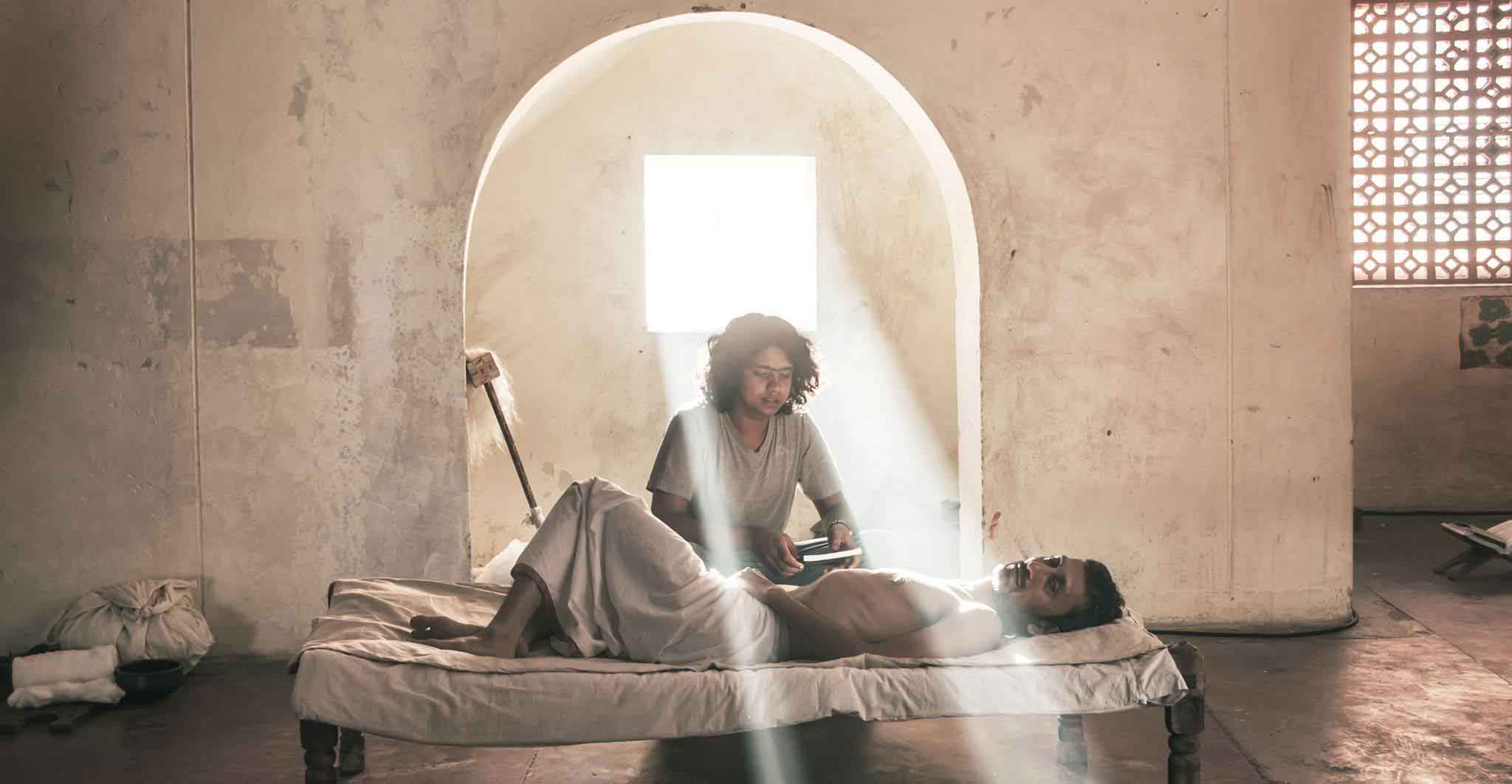 It is rare to find an Indian film so universally lauded as an artistic and intellectual achievement – by achievers in their own right – as Anand Gandhi’s Ship of Theseus has been. Gandhi’s film is also unusual in that it is intended as philosophical reflection rather than social critique, which has been the normal approach of non-mainstream Indian cinema. The film has been made with a small budget but it is visually striking – not only because of the cinematography but also because of the seamless editing – and the performances are authentic. After all this has been said, one feels even guilty at taking issue with it and citing its inadequacies; still, the film is feeble conceptually, as this review will try to demonstrate.

Ship of Theseus is a ‘feel good’ film, a film which tries to affirm that the traditional virtues (like fortitude, honesty and simplicity) will be eventually rewarded. The ‘feel good’ film Forrest Gump (1994), for instance, is about the miraculous successes of a simpleton who eventually becomes a hero. There have been few ‘feel good’ films in India hitherto perhaps because popular cinema has been ‘escapist’; it has not acknowledged the realities of our society. The optimism of the ‘feel good’ film depends on first admitting many things that we gloss over and only then making its affirmations. It is only in recent years, with the arrival of the ‘indie’ film, that the filmmaker is even venturing into the poorer neighborhoods and this is therefore the appropriate time for something like Ship of Theseus. With digital filmmaking gaining ground, the indie film is reaching the more sophisticated audiences in India and the success of Anand Gandhi’s film is heartening.

As most readers will be aware, Ship of Theseus tells three different stories sequentially, all three stories being constructed around organ transplant. The first story is about a blind photographer named Aliya Kamal (Aida El-Kashef) who takes pictures aided by her hearing. She is wildly successful until she gets a cornea transplant and regains her eyesight. After this happens, however, her pictures begin to lose their unique quality and Aliya compares this to a centipede in a fable which, when it tries to understand how it moves, loses its capacity for movement. There isn’t much more to say about the story but it is evident that the director is wrestling with ideas pertaining to art and beauty. The message is apparently that we produce art without quite understanding the process; if we understood it, we might stop producing art.

The problem with the first story is the metaphor of ‘blind photography’. Unlike most of the other artistic objects which demand clear artistic intent, a photograph is taken by a mechanical device and one could take pictures even without looking. But the issue to be examined is whether a picture taken blindly could be ‘art’ – except by accident. Aliya is guided by what she hears but how would that help her compose since there is so much in each picture which cannot owe to noise? Then there is the question of the artist’s judgment of his or her own work. Unless one’s art passes one’s own judgment, it cannot be ‘art’ – regardless of how others evaluate or describe it, and the blind Aliya cannot judge her own pictures. A blind photographer is perhaps like someone who writes poetry in a language that he or she does not know – by arbitrarily cutting and pasting words from an existing text.

The second story revolves around a Jain ascetic Maitreya (Neeraj Kabi) who is fighting pharmaceutical companies to prevent them from testing their drugs on animals and ignoring the guidelines. Maitreya discovers that he is suffering from liver cirrhosis and only a transplant will save him. Since a transplant involves the use of drugs legitimized through testing on animals, he refuses to have it despite the pleas of his admirers, especially a young lawyer named Charvaka. Maitreya prefers to starve to death and therefore gradually weakens – until Charvaka argues that the human body contains so many living organisms that it is foolish to regard one’s body as separate from the milieu. Since they are constantly living and dying inside us, killing animals is an unavoidable fact of existence, is his argument. Maitreya killing himself by refusing treatment is therefore greater violence.

The second story celebrates commitment just as the first one celebrates fortitude but the difficulty with it comes from the easy resolution in which Maitreya agrees to the liver transplant. My argument here is not only that someone as intelligent and committed to a cause – as Maitreya is shown to be – would have answers to the questions that Charvaka poses. Since Maitreya is not merely an individual but represents a religious viewpoint, his going against his own tenets for ‘logical’ reasons is also indicative of the unreasonableness of the religious viewpoint. Charvaka’s argument is itself not watertight because there is a difference between the ‘violence’ unwittingly caused to organisms living inside our bodies and that caused to animals because of our conscious decisions. Once Maitreya agrees to the transplant, therefore, everything he has stood for comes crashing down. Since his life is left without its moral basis, one wonders how Charvaka could still respect him, as he once did. The film is, in effect, celebrating a virtue – that of commitment to a cause – but also arranging a ‘happy ending’ in which the protagonist abandons it.

The third story is less ‘philosophical’ than the first two and is about a young stockbroker Navin (Sohum Shah) who has just had a kidney transplant suspecting that the organ he received was stolen from a construction worker named Shankar (Yashwant Wasnik). Navin has been constantly chastised by his grandmother for being ‘socially uncaring’ and although he discovers that his kidney came from a legitimate donor, he pursues the recipient of the stolen kidney doggedly to Stockholm. The result of his efforts is that Shankar gets a handsome sum of money – which he would rather keep than have his stolen kidney returned. This is a simpler story without the intellectual airs of the first two but there is also very little of interest in it. The fact of money compensating Shankar for his loss also offers a cheap kind of satisfaction – as in the Hollywood courtroom drama in which the huge monetary compensation granted to the victims is the emotional pleasure offered to the audience.

The least admirable aspect of Ship of Theseus is evidently its philosophizing. Its intellectual debates are full of logical weaknesses and even its title makes little sense. The ‘Ship of Theseus’ – as has been widely publicized – pertains to a parable about identity from Ancient Greece: If every part of a ship is replaced, will it remain the same ship, is the question posed. Anand Gandhi’s film has nothing to do with the issue of identity and is merely about different people having a ‘part’ replaced. But if only the mast of Theseus’ ship had been replaced, would its identity have changed and could the above question even be posed? The film concludes with an epilogue in which it is revealed that the organs received by the three – and several others – belong to one man. But this only means that parts of a ‘ship’ went to other ‘ships’ but that still does not touch upon the issue of identity.

As already indicated there are severe logical fallacies in some of the film’s other notions as well but most of those endorsing Ship of Theseus have still been excited. I am not sure that Anand Gandhi is conscious of what is happening but his camera is always coming to his rescue. It arranges distractions for us when the arguments themselves collapse and we move swiftly quickly from intellectual engagement to experiencing sensory pleasure. The most striking sequences in the film – like the Jain ascetics walking off to god-knows-where – have neither a narrative not a philosophical purpose, but they are wonderfully shot. We should perhaps bring a key fact to the filmmaker’s attention – that Ship of Theseus could not have been as much of a critical success if his cinematographer had been visually impaired.

IMDB link of Ship of Theseus