Sharmila Tagore — A Journey Trapped between Promises and Possibilities 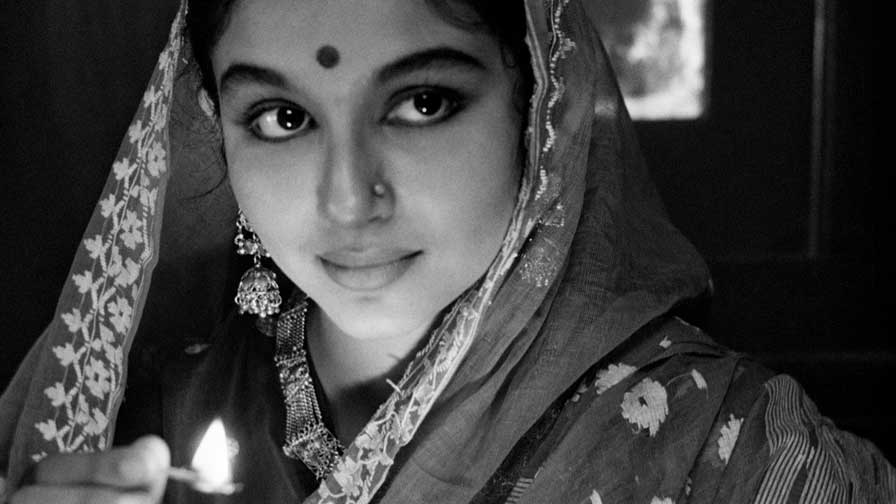 ‘From the east to western Ind,

Her worth, being mounted on the wind,

Through all the world bears Rosalind.

All the pictures fairest lined

Are but black to Rosalind,

Let no face be kept in mind

But the fair Rosalind’

–Shakespeare, As You Like It (Act III, scene ii)

In her heydays, Sharmila Tagore was a path breaker, a sensation maker and a constant stirrer of surprises; after a long career of four decades, she now mellows with age, warmth and grace. Like Shakespeare’s Rosalind, the pert and robust heroine of As You Like It, Sharmila Tagore is certainly one of those handful of articulate, witty, strong willed and intellectually bent actresses of Bombay cinema, but sadly enough, she is also the one whose real potential went unrecognized there and despite her stardom, the promises of the brightness of a thousand stars remained a far cry. Had her brimming virtuosity been fully exploited, Bombay cinema of the sixties and seventies would have chronicled drastically different stories that would have been more enduring in art and appeal. For cinema in the sixties not only meant color images and exotic locations but also a confluence of many new waves and an emergence of a global culture with long lasting effects.

For someone like Sharmila Tagore, who started off at the age of thirteen with a master ‘seer’ like Satyajit Ray as her mentor director, was guaranteed to have a long ride, rich and eventful. The ride was long, and eventful too, but in a hurry to finish that great length, it did not come to a halt to explore the treasure that lay on the wayside or within herself. When Sharmila Tagore first appeared as Aparna in Apur Sansar the intensity reflected in her eyes and facial contours indeed promised of a new beginning. Even without much speech—she mostly spoke in monosyllables, and rarely on her own—she brought forth the whole of a young bride, stepping into an unknown world, caught between the emotions of having to leave her parents on the one hand and the joy of being with Apu, her husband, on the other.

But then, instead of finding her moorings in her own surroundings, she chose to respond to the calls from outside. And, in a twist of irony, when she was grafted into the highly commercialized and newly glamorized Bollywood, her speaking eyes became still and dumb and remained wide open all the while, forgetting to flutter and sparkle at life’s new experiences. Her face that had emoted many layered thoughts in a single moment, merely got cast into plastered masks. In Kashmir ki Kali she had no ‘role’ as such but to push around her shikara all over and lure away her lover, like the famous la belle dame sans merci, into frenzied twitching and gibbering (in pain or pleasure nobody knows). She meant to break the stereotypes all the while; but in movies such as Aradhana, Amar Prem, and Safar, for which she is mostly remembered, her directors dismally fell short of raising her above them, either in gestures or in speech delivery or a haunting consciousness of the camera gaze. In Mausam too her character set out to be unconventional, but the overall impact did not come out without the lingering question of art and artificiality.

Namkeen, directed by Gulzar, to a great extent, brought back the freshness and naturalness of Sharmila Tagore the artist as Nimki, the eldest of three sisters in a remote mountain village. Sharmila is seen in one of her spontaneous best in her free and open postures and minimalist dress and make up. Surely, the raw landscape of mud walls and thatched roofs atop a rocky hill enhances this spontaneity, bringing alive all the nuances of her difficult situation in a seemingly uneventful life.

In Shubho Mahurat, Sharmila plays the dubious Padmini Choudhury, an NRI producer who puts her money in a movie but does something diabolic. In this ‘enactment’ of an amoral character, every bit of Sharmila’s finesse as an actress comes out to the tip, even within the frame of a thriller—we certainly do not forget that it was adapted by Rituparno Ghosh from Agatha Christie’s The Mirror Crack’d from Side to Side; a cracked mirror being a metaphor for our fragmented selves or ‘schizophrenia’, a disorder in which a number of contradictory facets build up a single personality. In Padmini’s character, Sharmila brings out with her natural ease the hidden selves of a divided individual in whom success, wealth and fame are interlaced with hatred, jealousy, revenge and an inescapable sense of failure.

In spite of all the overwhelming paradoxes in the illustrious career of Sharmila Tagore, given her talent, depth of personality and range of interests, we would have been happier to see the Sharmila magic burst and sizzle more vigorously like a never-ending cracker festival. We go about rapturously to call her the brightest jewel and the fairest of all faces like Orlando did in the forest of Arden for Rosalind, but we also wistfully reflect on what a difference it would have made had she walked with a halted pace to adore the hidden jewels.