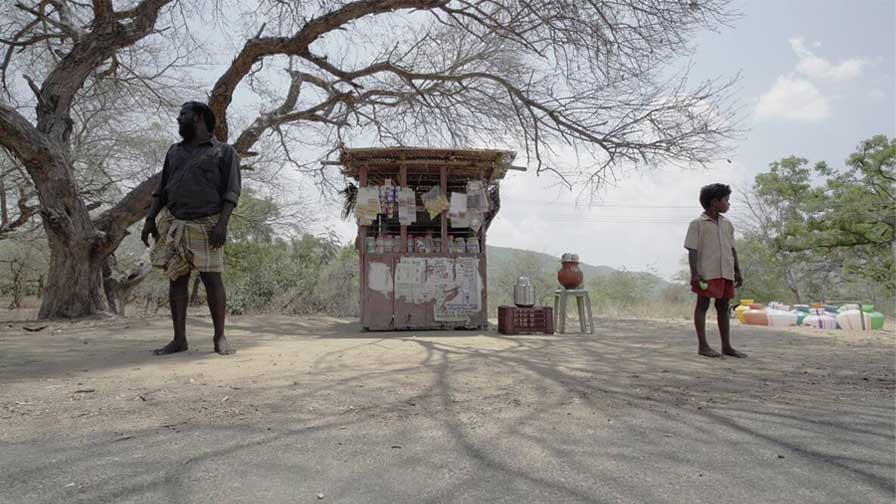 Set in the location-space that is the village of Arittapatti in Tamil Nadu, Pebbles (Koozhangal) immediately establishes the Oedipal relationship between the chain smoking, drunk Ganpathy and his son. The two take a bus ride together, the view of the window of which emphasises the cinematographic screen that is between the love-hate relationship between director, audience and actor; whilst at the same time making the actor the agent of the empty signifier (MacGuffin) that carries the film forward.

The film uses imagery inspired from video gaming with each character being followed by the steadicam. Very often the steadicam pans away from the character to allow the audience to project thought onto the imaginary. Between the vignettes are tableaux shots that reduce the plane of the image to a single dimension, i.e. intensity. The top angle shot towards the end transforms this intensity into a geographical location, so that the purpose of cinema, according to this writer, is simply for a body to occupy space.

The land of the location-space represents the masculine qualities of violence and patriarchy, making the mother-figure i.e. Ganapathy’s wife the ellipse in the film.The bus itself is a medium of slowness. During the bus ride Ganpathy participates in the transactional nature of the everyday (by purchasing a ticket) whereas his son is much more interested in the sensorial potentialities of the space, denoted by the shot of him blowing the balloon.

Film maker P.S. Vinothraaj uses the point-of-view shot to connect different characters as the camera follows them much like in a video game. The point-of-view shot denotes a perceptional consciousness i.e. that of wakefulness; whilst the characters appear at rest, in motion or static in a moving vehicle. The film’s cinematography is reminiscent of Gus Van Sant’s Elephant, but is different in one respect. Whereas Elephant centres on the high-school shooting as key event, Pebbles creates vignettes around the notion of the absence of the event.

This creates for a unique feminist approach to film making in which presence is suggested by absence i.e. the absence of the mother and of a central event. This feminist approach is underlined in the final sequence of the film, in which the anima is represented by the puddle of water in the parched landscape. The character uses the pot to collect this feminist consciousness, an agglomeration of consciousness just like the film is an agglomeration of time; whereas cinema itself is the pot itself i.e. the container for consciousness.