Nostalgia for the Future: Dwelling as Denotation 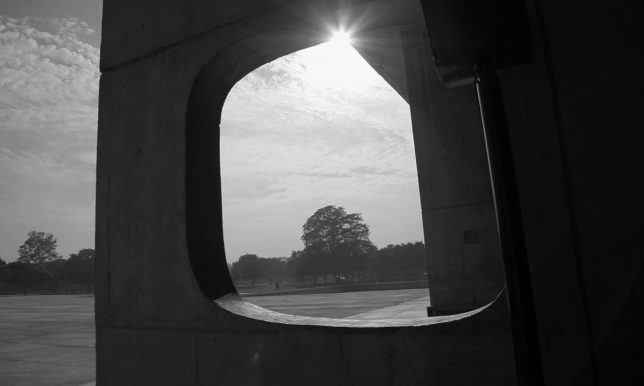 The primary proposition of Avijit Mukul Kishore and Rohan Shivkumar’s Nostalgia for the Future is dwelling (in the Heideggerean sense) as denotation. Contrarily the voice, Kishore’s voice, is the embodiment of this denotation. Over the course of the film this denotation becomes a volume, concentrated or rarefied, which creates a mechanism (instead of an ideology) for a withdrawal of violence, that the moving images force on the viewer.

Kishore and Shivkumar are successful at creating a dialectical cinema at many levels. The primary dialectic exists between Gilles Deleuze and Felix Guattari’s (DG) conception of smooth and striated space. Smooth spaces, for DG, comprise of spasmodic bursts of space that cannot be fit into a rhythm whereas striated spaces are frozen music or architectural. For Kishore and Shivkumar, space itself is poetic, in the Bachelardian sense, indiscernibly split into crystalline architecture (striated) and its handheld filming (smooth). There are several other layers to this dialectic between smooth and striated in the film: the handheld camera and fixed camera shot, the zoom in to denote a vertical expansion instead of the pan that emphasizes horizontality, and the shot of blowing soap bubbles that turn the liquid into the gaseous.

Kishore and Shivkumar view the nation as the body emptied out (DG’s concept of the Body without Organs (BwO)) so that the Bauhausian dictum of materiality (film versus digital) overtakes the form (the cut as having a physiological aspect). Time is spatialized in three dimensions: that of universal time, the middle-class notion of a universal as solving the problematic; the particularized lived time, as blissful ekstasis i.e. the duree of the film; and historical time as it brings about a withdrawal of movement (the freeze frame shots of Gandhi and Ambedkar). Cinema itself is this violence that requires the force of history so deny itself movement and therefore violence. However taking a shot is against the force of history and can be considered a-historical, like any other creative act. The city is space for DG’s mechanosphere, whereas the individualized time is Derrida’s differance in temporality so that every shot is new.

The Bauhausian concerns of the film are such that the materiality of the image is more important than its crystalline form so that the denotations of Le Corbusier’s architecture either break into surficial perception (Deleuze’s liquid perception) or directly show the source of light (represented through the sun itself entering the composition of the shot). The smooth version of the space finds its denotational culmination in the shot of the waves, whereas the smooth and the striated find their middle point (or rhizome) in the sequence with the spiral  staircase. This spiral is nothing but an icon for consciousness itself.

The universalized temporality forms a middle-class socio-political stratification that finds its materiality in the quoted films from Bombay cinema of the ‘50s. For Shivkumar and Kishore this middle-middle stratification is a ‘fozzilization’ of space; that finds its cinematographic contrast in the sequence where the aakaar of a raga becomes the State-sponsored All India Radio/Doordarshan jingle and culminates in the final shot where the Dalit rhythm creates a microcinema in which movement is extracted from matter, and representation is taken outside the domain of intentionality.