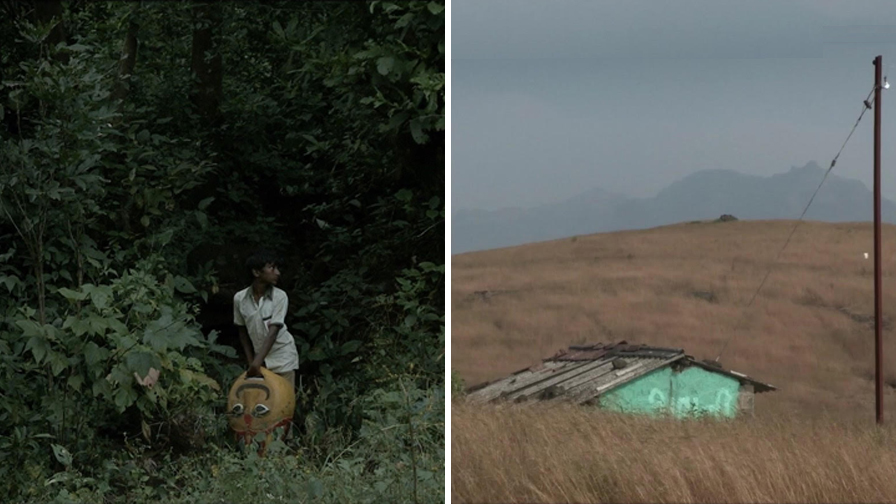 Kalsubai the goddess of the Mahadeo Koli people is the subject of the film. The mise en scène is so constructed that the primordial consciousness is the id, the unconscious that manifests itself as the ego of the subject Goddess. The structuring of the Self is as a tree and not as a rhizome. The vertical aspect ratio also helps one to see the frame’s matching with the expansion of consciousness, as the film progresses. 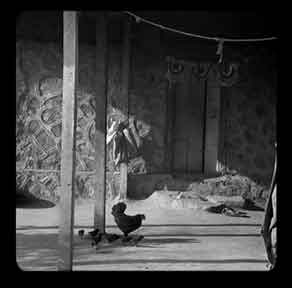 There are two aspects to cinema. One is the Open construct that allows space and time to be dis-closed. At the same time the voice over suggests the second aspect of the construct of cinema i.e., the Outside represented as thought i.e., through the voice over. Basu manifests the social anima by having only women as subjects praying to the Goddess figure materialised as an idol in the color red. The mountain formation is the face that simultaneously is symbolic of layers of consciousness in the phallus. Simultaneously, the film uses the Earth as geographical formations for the mechanic assemblage, represented by the windmills. The image literally meets its shadow as the passing of the shadow, as the subject represents this Earth as feminine. Cinema is not consciousness but its container.

The film, as pointed out above, is middle to middle through the relationship between the ‘before’ and the ‘after’ that opens up to time i.e., the time of succession. This before and after is made possible through the middle i.e., the rhizome. However, Basu seems to be interested in the beginning and the end and not the middle. The beginning and end represent a theological approach to the Self, whereas the middle-to-middle structure of the rhizome represent the logical positivism that is manifest as science. The animals are represented before their sacrifice as Event, whilst the repetitive chants in praise of the Goddess represent the everyday.

Ritual and sacrifice form a dialectic with the everyday that produce the dialectic between pre-emption and delay i.e., chhanda. This metre or chhanda is matched pictorially to represent the opening up of the subconscious as a tree that signifies layers of consciousness. In other words, the aspect ratio is the index of consciousness. The perception is solid, causing a centering of both the Subject i.e., Goddess Kalsubai as well as the spectator (the Big Other), such that the spectator can emphasise freewill to will the shot. In this way, the film does not produce a quality of attention (dhyana) through metaphysics but resolves its subject-object dichotomy through the historicism of space as dialectic.

Kalsubai made its world premiere at the Visions Du Réel Film Festival. It recently won the Grand Online Prize of the City of Oberhausen at the 67th International Short Film Festival Oberhausen.