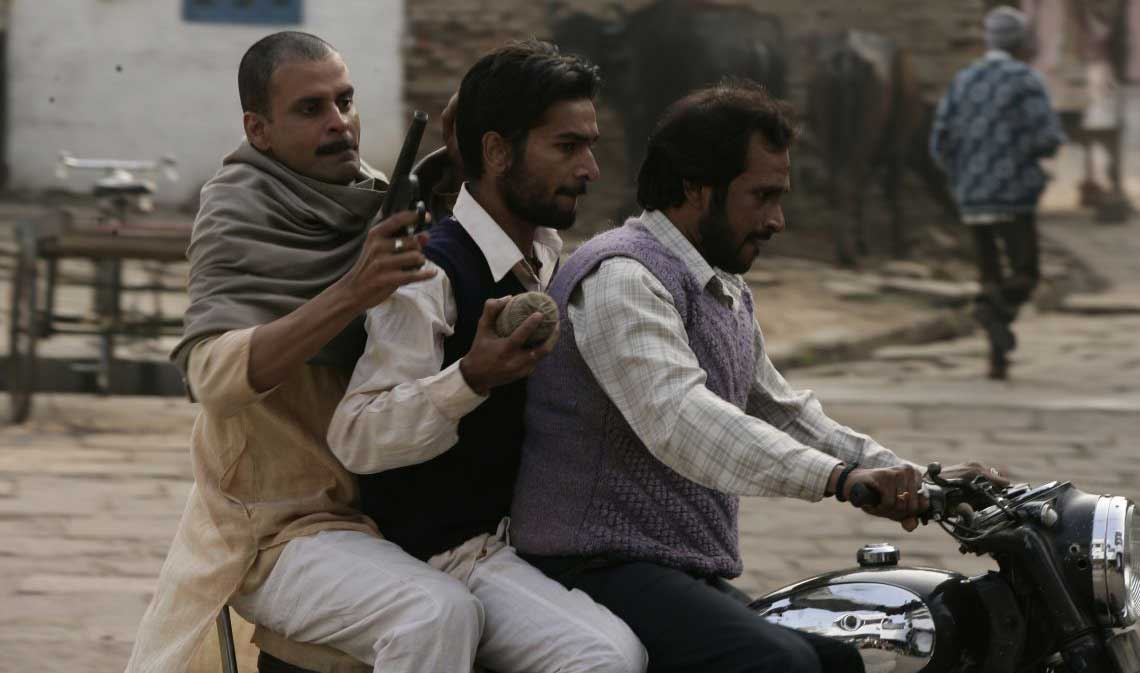 Anurag Kashyap’s chief strength is his sharp eye for the milieu but his films also seem curiously blank – as if there was little else underneath surface. Since his style is so visceral, one wishes they were informed by some understanding of behavior and politics but, reflect as deeply as one might, one finds neither his characters – as in Dev D – nor his political sense – as in Gulaal – perspicacious. How, for instance, does the political party in Gulaal relate to Indian politics and/or why do women find Dev attractive? When Dilip Kumar plays Devdas there is a tragic magnificence to the character and one understands his fascination for Paro and Chandramukhi but is Dev, as played by the limp Abhay Deol, even a worthy subject for fiction? Also, the original Devdas was a colonial text allegorizing the relationship between the colonizer (as autocratic father) and the colonized (as weak son). One saw no wisdom in contemporizing it as in Dev D and ridding it of this context.

Gangs of Wasseypur is, ostensibly, a tale of revenge spanning several generations. It begins in 1941 in Wasseypur, now a suburb of Dhanbad and tells the story of Shahid Khan who robs food grains from trains in the manner of a known dacoit named Sultana and sells them in town. The gambit is that the dacoit will be blamed but this comes to the notice of the dacoit’s clan (Qureshis) and he is banished to Dhanbad. After 1947 the widowed Shahid Khan works as a strong man and enforcer for a mine owner named Ramadhir Singh. When Ramadhir hears a conversation in which Shahid plans to own the mine some day he arranges for Shahid to be killed. Shahid’s son Sardar is saved by a friend but Ramadhir believes him dead. The boy Sardar swears to avenge his father’s death and this is what the rest of the film is largely about.

The film does not begin in 1941 as may have been gathered from the above narration, but in 2004 with a gang belonging to Sultan Qureshi attacking a house belonging to Faisal Khan and neither of the two have appeared yet in my narration. When they do actually turn up, we have actually forgotten that the film began with them. The violent opening sequence needed to generate enough curiosity to keep us guessing but that has not happened. We have seen unknown persons killing their equally unknown adversaries and we are not excited. It is perhaps not violence itself that interests us as much as the narrative made of it but this truth has perhaps evaded the filmmaker. In any case, so many names – Hindu and Muslim – and relationships are flung around in the first hour that we do not connect Faisal Khan or Sultan Qureshi – when they appear – with the occurrences in the opening sequence.

In time – 20 years later – Sardar Khan is selling bus tickets in Dhanbad still obsessed with thoughts of vengeance against Ramadhir.  Sardar Khan is played by Manoj Bajpai who was born in 1969 and Ramadhir Singh (who was his father’s employer and had him killed) by Tigmanshu Dhulia who was born in 1967. Shouldn’t the two look as though they belong to different generations instead of being equals? One may be sure that inattention to such detail interferes with our sense of chronology and contributes to making the film incoherent. Here are two other instances: Shahid Khan, who is in his thirties, is killed by an arms dealer in Varanasi at the instance of Ramadhir Singh. His grandson Faisal Khan (also in his thirties) meets the same arms dealer under identical circumstances later on. Can the fact that the arms dealer has some grey hair at the second meeting prevent this from being confusing?  Also, Faisal Khan (played by Nawazuddin Siddiqui born 1974) is Sardar Khan’s son. Father and son are seen together in the same sequence, neither actor is wearing makeup and Faisal Khan (son) looks older than Sardar Khan (father). The justification offered is that Faisal Khan is a drug addict but is this enough?

Many reviewers have complained that they didn’t really get involved in the story of revenge. The problem is perhaps that Anurag Kashyap has a feeble understanding of filmic narration and syntax but relies on a needlessly complicated script that he can’t handle. Given his dramatic filmmaking style, he is probably the most ‘Hollywoodian’ of Indian film directors and he would do well to study the neo-Aristotelian principles favored by classical Hollywood cinema which insist on an ‘invisible style’ – the delivery of the story without stylistic interference. The first principle of the classical Hollywood method is that we should get a clear sense of the space of the action as a continuous one. Ideally, we should even be able to map everything out. Kashyap is consistently indifferent to this rule and we don’t get a sense of even how the people within a single sequence are positioned in relation to each other. Another stylistic device of doubtful merit is his choosing to interrupt conversations by illustrating their purport, visually. If someone says, for instance, “In those days we lived in a house in Dhanbad,” he cuts to the house with the conversation continuing as a voiceover. Many of these voiceovers in Gangs of Wasseypur are only mumbled and we also get the sense that too heavy a load is being placed on the talk. Much of what is spoken – involving relationships and motives – does not even register with us. Another obstacle to our catching the significance of the action is the director’s penchant for close-ups – which convey nothing except that a certain face is interesting. Ideally, a close up should be used when a person is introspecting and the medium shot for conversations; here it is all arbitrary. Having the camera on the listener rather than on the speaker is sometimes a useful strategy but the director overdoes it and this adds further to the confusion.

The most important aspect of the classical Hollywood method is the causal linking between events. Every episode should be so essential that none can be removed without breaking the chain. But for the linking to be effective, we should be made aware – even within a sequence – of the key act likely to have consequences. If, for instance, two people smoke cigarettes while plotting a killing, it is evident that the smoking is a mere detail which will not impact upon the plot. The problem with Anurag Kashyap is that he puts in violent action as detail. Wives are being slapped, husbands are having their slaps returned, mothers are spanking children, adversaries are hurling expletives at each other; people are hacking each other to death, severed body parts are lying around, automatic rifles are being fired and bombs being flung, Sardar Khan’s wife is shouting at finding her husband in a brothel and screaming, moments later, while being in labor. Many of these violent acts – and the sex – often interrupt the drama and distract us. The point here is that one cannot guess which the dramatically significant bits are and which, the descriptive or merely colorful passages. There is so much going on that, by the midpoint, the film is already an unholy mess and one doesn’t care whether Sardar Khan will get his revenge. The film, in fact, can get anyone quite annoyed until he or she decides to stop making sense of it and simply watches.

It is perhaps only in its ‘look’ that Gangs of Wasseypur comes up trumps. Anurag Kashyap has an enviable eye for locations and faces and a great sense of what music to use to make everything seem authentic. He can even recount brief stories amusingly – like that of Faisal Khan and the arms dealer. One may not like to believe that what he is showing is ‘real’ but it is nonetheless convincing. Take some of the sequences in Gangs of Wasseypur which are put in only because they look and sound terrific: a group entertainment sequence inside a jail with a dwarf leading the dancing, carcasses of cows carried away and a butcher’s backyard in which a police constable discovers a human finger, Muharram frenzy in a small town marketplace. The killings are, by and large, authentic, as is the beating and the slapping although there is even monotony in much of this. The choice of actors for the roles is impeccable – but judged solely on the appeal of their faces since there is so much uncertainty about what each one represents. Most importantly, I cannot recall any other recent Indian filmmaker who has suggested so much sensuality in his/her women characters. The top Bollywood stars are made to seem mere dolls in comparison to Richa Chadda and Reema Sen – although the camera’s gaze is often blatantly voyeuristic. These are all the on the plus side of Gangs of Wasseypur but what do they add up to?

After reflecting a little on what Anurag Kashyap offers us in film after film, I come to the inevitable conclusion that he is basically into filmic tourism – of an unorthodox kind, to be sure. What he is offering us are vignettes of India that audiences have never seen – a gritty India not illuminated by insights but one that is still ‘real’. India has perhaps the grimiest locations in the world and Slumdog Millionaire attained fame by cashing in on it. But unlike Slumdog Millionaire, which imposed a spurious ‘meaning of India’ on its touristy vision, Anurag Kashyap has no use for ‘meaning’ at all. Regardless of its dark subject, for instance, Gangs of Wasseypur has neither a political nor a moral focus. But his films, I propose, have the potential to attract more tourists than any ‘Incredible India’ campaign. There is perhaps a market for ‘grime tourism’ in India – a tour which includes Dharavi, the brothels of Kamathipura, the Chambal Valley and the badlands of central India, Varanasi, the tanneries of Kanpur and the coalfields of Jharia. What could be more exclusive than offering the visitor the spectacle of a few brutal assaults and perhaps even a killing or two?

IMDB link of Gangs of Wasseypur