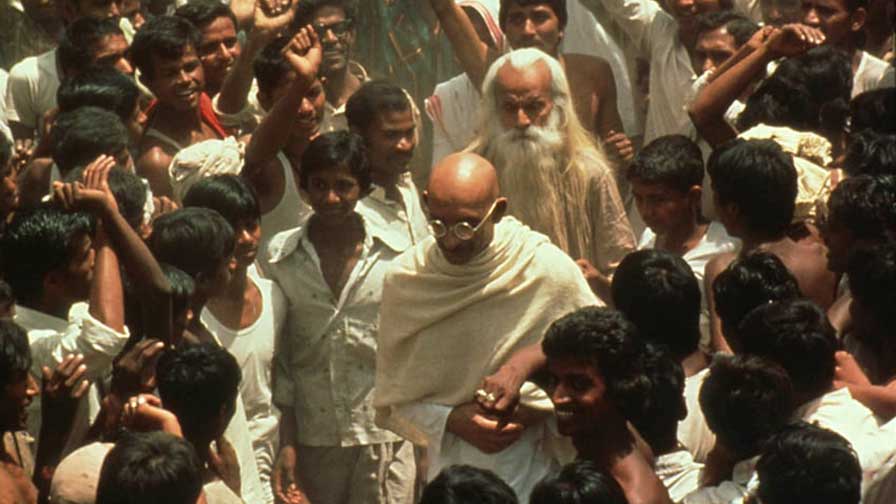 Out of the twelve films Richard Attenborough directed in his lifetime, seven were biographical pictures, a genre that has come to be labeled as the ‘biopic’. In a marathon interview given to John Gallagher in the year 1992, Attenborough explains his fixation with the genre: “I’m fascinated by the people who have changed our attitude towards accepted authority, accepted criteria in relation to the manner in which we conduct our lives and our supposed civilised society. I’m fascinated by those who’ve revealed things to us in terms of human relationship in the way we view each other’s problems and so on…”

Attenborough had debuted as an actor at the age of 18 in the British propaganda war film In Which We Serve (1942). Actor, composer and playwright Noel Coward was hell-bent on directing the film. Since he didn’t have any experience in directing, it was suggested that he hire a remarkable editor. The best editor in all of England at the time was a young man named David Lean. Eventually Noel was bowled over by David’s talent, enough to co-direct the film with him. And that’s how David Lean and Richard Attenborough debuted with the same film. Both prolific directors, both known for their obsession with the Orient. But they never worked together again.

Richard Attenborough’s life and work was a series of serendipities that fuelled his energies and his talent. His depiction of the sinister conman Pinkie Brown in Brighton Rock (1948), a film noir, made him a star overnight. The next two decades were filled with one classic role after another – I’m All Right Jack (1959), The Great Escape (1963), Séance on a Wet Afternoon (1964), and Guns at Batasi (1964). He set up a film production company with his friend and fellow actor Bryan Forbes under which they made films that allowed Attenborough to attempt new kind of roles, like in The League of Gentlemen (1959) and The Angry Silence (1961). He happened upon a biography of Mahatma Gandhi by Louis Fischer. He was deeply affected by Gandhi’s life and work. He was reminded of his father, who also was an admirer of Gandhi and who, many years previously, had taken little Richard to watch a newsreel of Gandhi’s visit to India. This was when he started obsessing over making a film about Gandhi. Motilal Kothari, an Indian civil servant who worked with the Indian High Commission at London, got in touch with Attenborough to discuss a project on Gandhi. Attenborough, who was already primed for it, jumped at the idea. He was 39 and a successful producer but hadn’t started directing yet. He began developing the script. He was so consumed by the idea that he told everyone including his co-stars. Shirley Maclaine, his colleague from The Bliss of Mrs. Blossom (1968), said in an interview that Attenborough kept discussing Gandhi throughout the time they spent off screen. In fact he was spending so much money on developing the project that he said he could “barely pay the gas bill”.

Attenborough also met the then Prime Minister of India, Jawaharlal Nehru, with the script on which he was working. Nehru encouraged him, but with a word of caution. He said, “Make a film… don’t deify him. That’s all we do in India. He’s too great a man to be deified… but make a film about him. He was a man, not a god or a saint!” On a side note, Nehru said this in the early 60s. But even today, more than 50 years later, most Indian biopics are just that —deified eulogies.

It was around this time that he got a call from actor John Mills about directing a film called Oh! What a Lovely War (1969). Attenborough loved the script but he was curious: why him? John said, “We either ought to have a director who knew everything, or one who knew absolutely nothing!”

In the meanwhile, Nehru, who Attenborough was counting on to help with the film on Gandhi, passed away in 1964. Within a span of just 6 years, Motilal Kothari also breathed his last. Under the circumstances, it might have been prudent to give up on the biopic altogether. But Richard Attenborough kept at it, and was more determined than ever to realise his dream project.

But it was Attenborough’s second directorial feature that would become his first attempt at a biopic. Young Winston (1972) followed the exploits of a young Winston Churchill, based in part on his own book My Early Life. For the titlular role, he chose a relatively unknown stage actor named Simon Ward. The film starts with him in India, in the middle of the Sikhs and the British fighting Pashtuns in the Northwest Frontier Province in 1897. There is a flashback to his childhood years, followed by scenes of Churchill in battles in Sudan and later in South Africa. The film was a great success, and the leading man Simon Ward became a star. Simon went on to appear in a number of roles in the next 46 years, the most recent one being as Bishop Stephen Gardiner in the historical television drama The Tudors.

As he completed two more films, A Bridge Too Far (1977) and Magic (1978), Attenborough renewed his attempt at making Gandhi. The script was almost ready, but financing the film proved to be a bottleneck. Warner Brothers and MGM Studios had agreed to back the project, but eventually backed out. The newly-formed National Film Development Corporation (NFDC) stepped up and with the backing of D.V.S. Raju, the chairman of NFDC, the film eventually secured financing. By the time Attenborough was ready to roll cameras, it was November 1980.

The fact that Richard Attenborough, a major Hollywood star (While his directorial work was reasonably well-received, at this point Attenborough was more of an A-list Hollywood actor rather than a star director. This was soon going to change.) was making a film on Mahatma Gandhi had spread through the by-lanes of Indian filmdom. When he was casting for the film, a young Naseeruddin Shah was considered for the role of Gandhi. He was given a ticket to London, where the audition was supposed to happen. Shah said in an interview that he was confident that he would bag the role. Where else will they get a better actor who suits the part? In fact, the Indian media flashed it on the headlines that Naseer had actually got the role. This further reinforced Naseer’s confidence. This was the first time he had been to London, and he had a blast. He was made to stay in a hotel in Oxford street and travel in a Rolls Royce, and was given some money to spend. When Naseer was taken to Shepperton Studios for the test, he met Ben Kingsley for the first time. As soon as he set his eyes on Ben, Naseer knew he was the right man for the part. A test was conducted, but by this time Naseer was convinced that Ben looked more like Gandhi than himself, and he was indeed more suited to portray the role. He also watched Ben’s audition, which further confirmed his thoughts. Naseer admitted later that he didn’t think he could do a better job than Ben Kingsley at that time.

Ben Kingsley’s (born Krishna Bhanji) paternal family was from the Indian state of Gujarat, the same state Mohandas Karamchand Gandhi was from. Ben Kingsley prepared for his role by studying newsreel footage of Gandhi, reading books on and by the man, dieting, losing weight, practicing Yoga and learning to spin thread just as Gandhi did. It was Michael Attenborough, Richard Attenborough’s son, who recommended Ben Kingsley to his father. Some other casting choices were interesting.

Martin Sheen, the star of major Hollywood films like Apocalypse Now, The Departed, Spider Man and Catch Me If You Can, played the role of American reporter Vince Walker. The character was fictional, and was partly based on real life journalist and war correspondent Webb Miller.

Attenborough’s doggedness which kept him attached to the project regardless of the setbacks, also reflected in his storytelling and approach to directing. There were some light moments as well. Quite literally. There was much concern expressed about how such a revered figure as Gandhi, a virtual deity to many Indians, would or should be portrayed on screen. Someone, in all seriousness, suggested that Gandhi should only be shown as a brilliant white light moving across the screen(!) An exasperated Attenborough snapped back: “I am not making a film about bloody Tinkerbell!”

The shoot was so detailed and so elaborate that every actor, including the extras, was checked for whether they were wearing any modern garments or footwear, and everyone was given 1930s style haircuts. The hairdressers were mostly women, and many of the men (who were villagers) objected to this as they were not used to strange women touching them. Amongst all the hoopla and idiosyncrasies, the film was eventually made and released in December 1982. It became an instant sensation. It became one of the highest grossing foreign films of all time in India. Critics gave sparkling reviews, and it swept the Oscars the next year, winning as many as 8 awards in various categories. When Richard Attenborough left England to make Gandhi, he was a great star who happened to be a good director. By the time he went back, he was an internationally acclaimed filmmaker.

Attenborough made five more films on historical characters, three of which could be said to conform with the form and feel of a biopic: Shadowlands, Grey Owl and Chaplin. Shadowlands (1993) is about C.S. Lewis, the writer of the fantasy series The Chronicles of Narnia, and his relationship with Joy Davidman Gresham, an American Poet. Grey Owl (1999) talks about a British man who becomes a Native American trapper, played by an early Pierce Brosnan. But after Gandhi if there’s one biopic that matched it brilliance and earned Attenborough great fanfare and admiration, it was Chaplin (1992). Robert Downey Jr. is primarily known today for playing a certain ‘genius, playboy, billionaire, philanthropist’, but the film that turned the tide of RDJ’s career was Chaplin. After hitting the marquee as a teen actor with films like Weird Science (1985), RDJ became the darling of primetime television when he played the romantic interest of the lead character in Ally McBeal. But even before that, Attenborough surprised everyone by casting the 27 year-old Downey Jr. as Chaplin. The studio wanted better bets like Robin Williams or Billy Crystal. Even the virtually unknown stand-up comedian-turned-actor Jim Carrey was also considered for the role. But it was Attenborough’s doggedness at play again. He stuck to his guns, and Robert Downey Jr. became a brilliant Chaplin. He infused the character with verve, charm and flamboyance to such an extent that even today, post-Iron Man, it is inconceivable of any other actor playing Charlie Chaplin on-screen. Other than Chaplin himself.