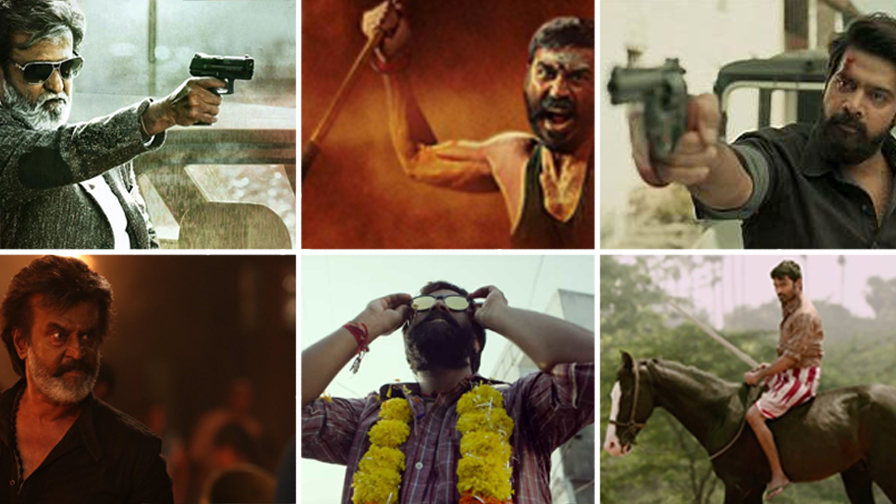 Dialogue from Pa. Ranjith’s Sarpatta Parambarai, which revolves around boxing, a bloody, violent sport and identity of clan prestige.

Mahatma Gandhi epitomised non-violence as a potent tool to express one’s strong dissension against injustice. His peaceful protests against the brutal force unleashed by the mighty British Raj to cow down citizens into servility and submission ultimately won India her freedom. It is now nearly 125 years since that child from Porbandar, the young lawyer from South Africa, rose to singularly take on the mantle of leading India to independence. Answering violence with peaceful, pacifist protest, dialogue and reasoning, affirmative action, rather than by baton for baton and bullet for bullet, Gandhi epitomised what non-violence and civil disobedience can do to unreasoning powerful State authority and its venal, brutal ways.

It would have been great if our blue blood, modern day young and aspiring film directors took lessons from India’s painful past and gave wings to it in their works of art as they bring to centre stage of public discourse the various ills that still dog the Indian society. However, that is not to be. Filmmaker after filmmaker, in recent times, with wanton disregard to the fact that violence only begets violence, have been celebrating violence as if it were a virtue and their birth right.

Vicious, vituperative violence is being extolled in film after film as a legitimate form of registering the filmmaker’s displeasure at how the marginalised and underprivileged, especially the Dalits, are being treated in society. Dalit-oriented films have become the staple fodder to draw unsuspecting crowds of late. So much so that every second or third film that graces the movie marquee today, be it at traditional single theatres or streaming platforms, invariably revolves around championing the cause of the much-abused Dalit minority.

While one does not dispute their legitimate desire to present the problems that have been haunting the marginalised ilk since eons even to this day, what is problematic is the way these directors advocate violence as a necessary and inevitable recourse to protect one’s identity and also earn respect in society. Bikas Mishra correctly avers, “the politics of identity – caste – are central… Things have to be destroyed and demolished for a new world to emerge.” And there is a proper /better way to do it. In the recent past, there have been films such as Chauranga, Court, Fandry, Sairat, Masaan, Anhey Ghore Da Daan, Papilio Buddha, Pariyerum Perumal, and Mandela that capture the humiliation and discontent in the lives of the marginalised and underprivileged sections in a much more humane, subtler, and sensitive manner.

Currently, particularly in the cinema of Tamil, the erstwhile servile, subservient Dalit character has taken a 360 degree turn. They are now the protagonists and take on their powerful oppressors by fighting back tooth for tooth and eye for eye.

This change occurred with the emergence of filmmakers belonging to the marginalised class; filmmakers such as Pa. Ranjith, Mari Selvaraj, Balaji Shaktivel, and Vetri Maran. The criticism is that by foisting aggressively assertive, heroic Dalit figures, the filmmakers have conveniently cultivated a commercial narrative rather than reflect the actual reality in a more nuanced and subtle manner. While it is important to make the Dalit empowering, assertive, and aspirational, the manner in which this is carried out is equally important.

Violence is promoted by the cultivation of a sense of inevitability about some allegedly unique—often belligerent—identity that we are supposed to have and which makes extensive demands on us (sometimes, of a most disagreeable kind)… Violence is fomented by the imposition of singular and belligerent identities on gullible peoples, championed by proficient artisans of terror. (Amartya Sen)[1]

Replace ‘gullible people’ with ‘mass audiences in India,’ and ‘proficient artisans of terror’ with ‘filmmakers and lead actors who portray the injured Dalit,’ and the ugliness of the complete picture gets revealed. The blinkered approach of these filmmakers, some of whom have had the luxury of good education, raises an abject sense of disquiet and anxiety.

Our society’s engagement with caste—whether it is cinema or any other domain—has been very poor. We have reduced the narrative to caste as a problem that concerns only Dalits, and involves the perpetration of physical violence. In reality, caste in India works in a myriad of ways. But most of our filmmakers do not seem to see the value in representing these aspects. (Rajesh Rajamani)[2]

To instigate a new discourse in public sphere, both among afflicted and perpetrators, on subaltern struggles of marginalised and oppressed underprivileged sections of society, their brutalised existence, these new age filmmakers, get carried away depicting visual violence without realising the deleterious effect it may have on the consuming, participative audiences.

Be it Palasa (1978) or recent releases such as Asuran, Karnan, Kaala, and Kabali, with Dalit protagonists, violence becomes the baton of battle against the dominant and domineering class. The Telugu film Ardha Shathabdham goes to the extent of having a tagline that screams, “Democratic Violence”.

Playing to the gallery by populating the visual narratives with gratuitous, gruesome and vengeful violence, and streaking the screen in blood, has become the new normal. A pointer to this tempestuous trajectory can be gauged by the dialogues of the sword-wielding Dhanush in Karnan, “They beat us for just asserting ourselves. Now that the assertion has started, we won’t back down,” and Rajnikanth in Kabali, “We will sit, putting foot over foot”.

Visual violence by idolised icons is an enticing market-driven demand. Therefore, there ought to be a law to ensure that filmmakers and stars take responsibility on how their films are received by impressionable fans eager to mimic their larger-than-life screen idols.

Dalits are consistently shown as powerless. It is as though Dalit existence has meaning only in relation to caste society, and that victimisation is the essence of ‘Dalithood’… Popular cinemas narrativise the social experiences of the communities corresponding to their constituencies… Strategy is to place a key social happening at the centre of the narrative and use it to relay a ‘political truth’ to then be learned by a chosen protagonist/character… It is therefore easy to confuse the star with his/her role – which might also explain the phenomenal success of some film stars as political leaders. Stars rise into prominence when their physiognomies and screen presences answer to the requirements of the time, and it is uncommon for film stars to play against the types they are habituated to playing… The audience is invited to identify with the protagonist, and it is evidently intended to imbibe the same truths. The effect this has on film narrative is that characters then become empty receptacles for instruction. (MK Raghavendra)[3]

These new age filmmakers may be making an effort to instigate a new discourse, both among afflicted and the perpetrators. However, instead of abjuring excessive visual violence as form of retribution, they are merely stoking a dormant volcano of impressionable audiences into angry avengers. Instead of extolling machismo virtues and overt caste and identity glorification, Dalit filmmakers should be careful and conscious in every aspect of filmmaking. Shouldering immense responsibility, they should shun over-glorification of violence, pride and bigotry to emphasise on alternative education, constitutional resolution and empowerment.

Dalit cinema should be careful to not set a wrong example for the Dalit community. Will that happen? Future films and their makers may provide the answer. Till then, violence will continue to rule the roost in Dalit cinemas, as Dalits fight for affirmation, acceptance and assimilative identity in the socio-political scheme of the public discourse.

Susairaj, Antony. The Paradigm shifts in the Portrayal of Caste in Tamil Cinema and its impact on the Tamil Society. Journal of the Nanzan Academic Society Humanities and Natural Sciences (20), 121-138. 2020. https://core.ac.uk/download/pdf/328007935.pdf

Naig, Udhav. From ‘Attakathi’ and ‘Kabali’ to ‘Pariyerum Perumal’: How this decade changed caste representation in Kollywood. The Hindu. December 30, 2019.