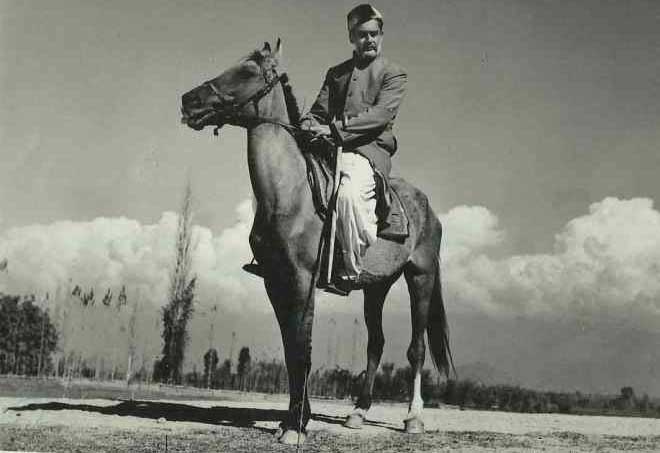 Cinema screening was revived last week in Anantnag when a local theatre [highlight background=”#f79126″ color=”#ffffff”]Heewan[/highlight]—they actually mean ‘Heavan’—welcomed a big batch of CRPF personnel as its first audience in more than three decades, to watch a screening of a Hindi film brought in from Jallundhar.

Until about one year ago, the same movie hall was the shelter for the same CRPF men, who had been posted to not only guard the premises but also use the building as a base to send out patrolling parties into the militant infested town.

In 1997, I had visited this theatre, curious to know the brand of the machine used in this theatre when it was operational. The projector room had been taken over by the gazette officer-in-charge, for use as his office-cum-bedroom.

This theatre when operational was the biggest movie hall in the Valley with a seating capacity of 525 seats. It was owned by a family member of Bakshi Ghulam Mohd, once the Chief Minister of the State, and had Dolby Sound and a CinemaScope screen.

I had to climb three floor levels to reach the projection room, where I discovered the small rewinding room with empty spools still lying around, and the main room, where a pair of Gaumont projectors were lying dead, still waiting for the arc rods to warm their belly. The cobwebs and dust everywhere were sufficient indication that the paramilitary had no intent to make this place permanent for themselves. It took nearly thirty years to prove their foresight.

My first foray into theaters in Kashmir was in 1956 at [highlight background=”#f79126″ color=”#ffffff”]The Regal[/highlight] near the Residency. I saw an English film. In Srinagar all movie halls screened their entertainment in four shows daily, the first one starting at around 11:30 A.M. with a break that coincided with the afternoon prayer. The intermission would be extended wisely, and then the second half of the film would proceed. All evening shows screened English films, except on Fridays when there would again be a lull for the Jumme ki namaaz.

Cinema came to Kashmir around 1932, on demand from the resident British families who would drive up from Sialkot, Multan, and other cantonments, for the summer season. The British also decided to locate a big cantonment in the suburb of Srinagar town to watch over the doings of the Maharaja of Kashmir, who they never trusted. The first movie hall to be constructed was The Regal, located near the British Residency. A contractor family was pushed into constructing and running the establishment. An Indian exhibitor from Amritsar offered advice on how to run the establishment. And a film distributor of Jallundhar was attached to feed this movie hall with films.

For the locals, it was [highlight background=”#f79126″ color=”#ffffff”]Palladium[/highlight] theatre in Lal Chowk that was most patronized. I saw my next film, a Hindi feature, here, sitting on a rickety wooden seat and sharing the odour of local traders. Palladium screened the latest films and it required moviegoers to get their tickets in advance to avoid disappointment. The Palladium management was also more defiant of the militants, and continued its operations until one fateful night when the militants arrived and burnt down the entire premises. After a couple of years, the front portion of the theatre came to be used as a Police Post and thereafter the CRPF made it a base to guard the Lal Chowk from protests.

The Valley of Kashmir had 19 cinema halls working in its peak business during the 1970s; nine of them were running in Srinagar and its suburbs. There were three halls in Anantnag, two in Baramula, and two in Sopore, and the rest were scattered in smaller towns. The Army had garrison movie theatres in Baramula and Sopore, appropriately named Thimayya and Zorawar, respectively.

The rise of militancy and Wahabism proved the undoing of the cinema trade in the Valley. The first to send out signals that cinema viewing was haraam were cadets of the Hizbul Majaahideen who circulated messages to theatre managements to stop the screenings of films in their halls. First, the English films disappeared, since they also had occasionally Jewish artists, then, Hindi films were slowly withdrawn. Some enterprising theatre managers even started screening smuggled Pakistani films, but to no avail. Then, the militants burnt down Palladium in Srinagar and Nishat in Anantnag, to send a firm message to Kashmiris: NO FILMS FOR YOU.

Cinema screenings in the Valley closed down totally by 1992. In fact, film shooting also came to a close in Kashmir Valley. This lasted till 1998, when Faroukh Abdullah, Chief Minister of J&K, went to Mumbai requesting for the return of film companies to the Valley. A Telugu film unit from Hyderabad made the beginning. They came, did a guerrilla shoot of a film song, and returned before the militants could even know that they had visited the place!

Once the film shows were closed, the exhibitors waited for a signal to return to business, but when none came, all the property holders began to look for alternate activities to put these premises to an alternate use.

Theaters in the Valley such as Heewan, [highlight background=”#f79126″ color=”#ffffff”]Samad, Shiraz,[/highlight] and Neelam were offered to the security forces to convert the premises into camps. That ensured the physical safety of the infrastructures and an assured return as rents from the State.[highlight background=”#f79126″ color=”#ffffff”]Khayyam[/highlight] in Nowpura was converted into a temporary hospital. [highlight background=”#f79126″ color=”#ffffff”]Neelam,[/highlight] located behind the Srinagar State Secretariat, offered to screen films provided the State posted a large police contingent to avoid a militant’s protest. The State posted a police post and Neelam continued to screen single afternoon shows for the better period of the social ban, but the theater still observed the occasional calls of hartal, which is endemic in the Valley.

The Valley eventually began to realize that post-1990 a new generation was born that had never been to a movie hall. Video piracy bloomed. The age of viewing films by streaming on laptops also commenced. The elders would talk of seeing films during their youth. And Doordarshan screened films periodically, which were no fun because of the frequent power breaks in homes. The charm of social gatherings to see films had disappeared. The more enterprising ones began to hire taxis to travel to Jammu and Udhampur to see their favourite films. Women would occasionally hire a busload of their friends for such outings. The new National Highway Bypass, which reduced the travel time between Jammu and Srinagar by nearly two hours, also led to the rise of the taxi shuttles between the two towns, solely to ferry cinema patrons.

One enterprising Srinagar businessman, Vijay Dhar, son of D.P Dhar of yore, who had a hotel business in Srinagar, decided to restart cinema screenings in town. He started the [highlight background=”#f79126″ color=”#ffffff”]Broadway[/highlight] theatre, but found his audience disappear often because of the many hartals that were announced. After running the theatre for three years, he closed it down and converted it into an assembly hall for weddings. Dhar is presently planning to return as a movie exhibitor, now that PM Narendra Modi has urged for the return of film screenings in the Valley. In a way, this asserts that normalcy is returning to the Valley. But more than that, the return of Bollywood would also help in the return of Indian tourism. No one has forgotten how in 1965 when Kashmir Ki Kali was released nation wide, the Valley was swamped by tourists keen to explore this part of the country. The people of Kashmir had found a new vocation for themselves, and supporting film shootings was just one of them.

Adding to the call to bring cinema back to the Kashmir Valley are actors like Salman Khan, who stayed in the Valley during 2015 for a long duration to film Bajrangi Bhaijan. Kashmiri Pandit Vidhu Vinod Chopra too has endorsed Salman’s appeal. But the doors of the old premises are still closed.

Permanently closed will be the doors of such old favourite centers of gatherings such as [highlight background=”#f79126″ color=”#ffffff”]Firdouz, Shah, Kapra, Regina and Naaz[/highlight]; names that spelt entertainment; whose owners not only brought down the shutters but also the physical structures, and had them replaced with solid investments that sustained their respective families.

There is a move now in the State government to offer soft loans to any experienced enterprise that is willing to restart the business of cinema screenings In the Valley. All are still waiting and closely watching how the resident militants of the Valley react to the latest call of the State Government to revive cinema in the Valley.

Even two brazen entrepreneurs will do for a beginning!