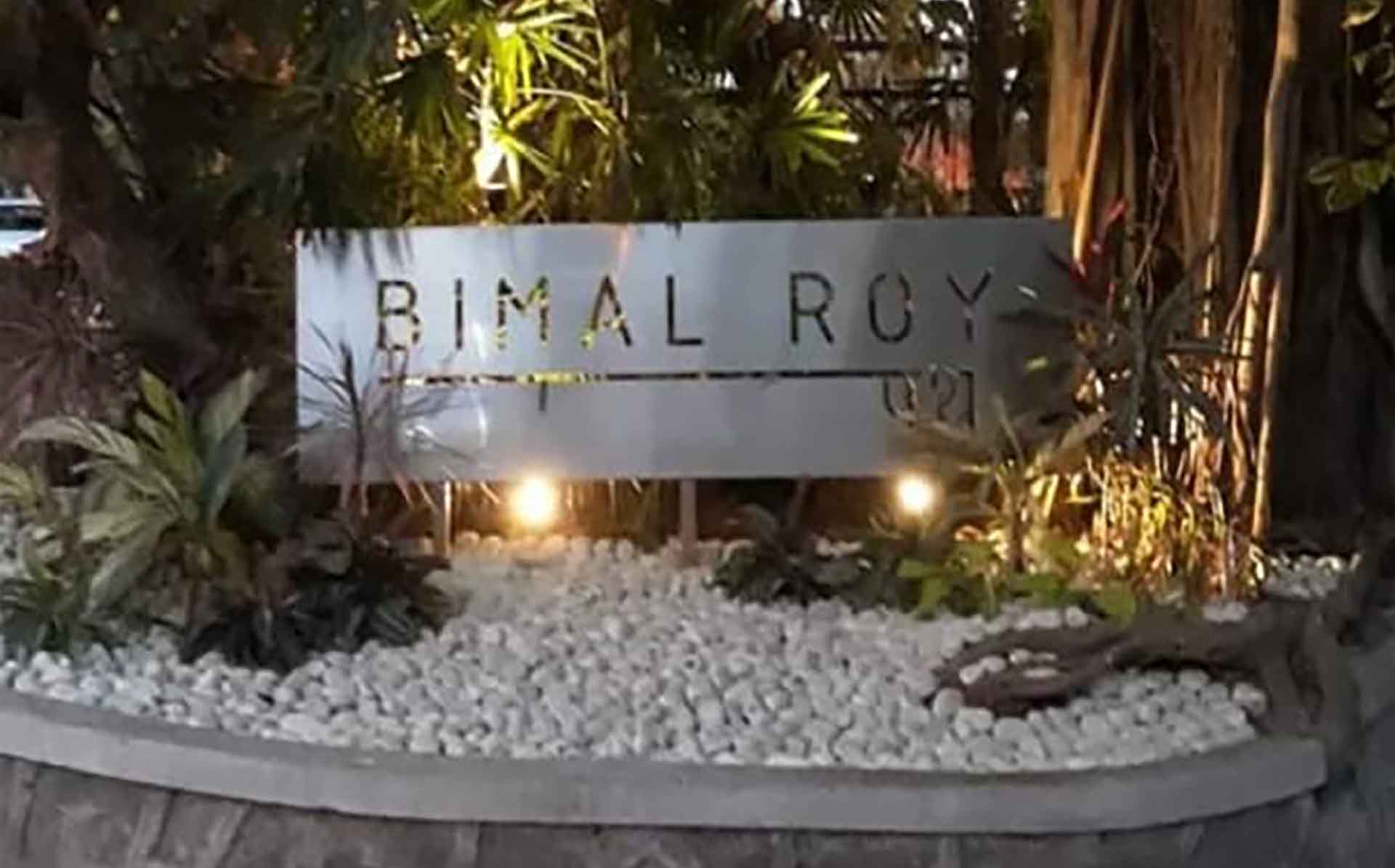 I wasn’t the one who proposed a road in Baba’s name. It was my eldest sister. But she handed me the responsibility to see the project through sometime in the beginning of 2016. Without any warning she thrust a letter in Marathi into my hand and said imperiously : ‘Take this and complete the job. I am fed up of following it up’. My sister is a bit like Bertie Wooster’s Aunt Agatha. One doesn’t mess around with her if one knows what is good for one. The letter turned out to be from the BMC, granting permission to name a road Bimal Roy Path after Baba, but there was no mention of any location or time frame. My only link with this proposal so far had been with a friend of my sister. He told me that she had asked the BMC to rename the extremely dirty and sinister path leading from Bandstand to Mount Mary Church, alongside the wall of Shahrukh’s property as Bimal Roy Path.

I remember saying to him it was better not to have a road named after Baba, rather than have this hell hole in his name. I never heard anything further after this so I presumed the project was shelved. Then out of the blue, sometime around July or August 2016, my young neighbour Aakif Habib called and said: ‘I believe you have permission to name a road after your dad. May I follow up on it? I am close to all the local biggies. I am confident I can push it through’. I was overjoyed and told him to go ahead. But this was a bit like putting the cart before the horse because there was no road to name as yet.

Sometimes one can’t see the wood for the trees. The answer lay just outside our gate but till Aakif pointed out the possibility it had never occurred to me. Aakif had struck bulls eye. The present Bimal Roy Path was actually part of Mount Mary Road originally, but physically it was a cul de sac with just a few buildings on it leading to a dead end. But the wonderful thing was that the sign would be just opposite our bungalow. The site was the perfect choice. And the perfect date for the inauguration was Baba’s death anniversary on 8th January 2017. It seemed sufficiently far away to allow us enough time to complete the job.

Now that the road and inauguration date had been identified we needed to decide what kind of sign should be put up. My two conditions were a) it should be aesthetic b) it should be timeless. Aakif came to the rescue once again. He produced architect Alan Abraham, John Abraham’s brother just the way a magician pulls a rabbit out of a hat. He said: Meet Alan, my classmate from school. He is well suited to the job, but you are free to choose someone else. But I took to Alan instantly and instinctively and I startled him by approving the very first design he showed me. He said don’t you want to see the other two? I said only if he insisted but my mind was made up. His wife Anca paid me a back handed compliment by saying she wished he had more clients like me. By this time it was the end of October and I was leaving for the US on 2nd November so I told Alan to go ahead and fabricate the sign while I was away. He nodded happily but when I returned I realized nothing had moved in my absence.

That was when twinges of anxiety began to occur. These escalated as time went by because by now Alan had decided to create a garden around the sign and that created a lot of extra work because the space for the garden had to be created too. There was a lot of creativity in the air but not enough activity. By now it was mid December so I gently reminded Alan about the date of inauguration. He gave a yelp and said don’t be silly, it can’t be. That is when I realized he was working to a completely different timeline. After that there was a sudden flurry of activity, but I was completely thrown when I found gardeners still adding plants and finishing touches to the garden at 3.30 pm when the inauguration was scheduled at 4 pm. I was close to having a cardiac. I am a perfectionist so I couldn’t leave the site till it met with my approval. As a result the Chief Guest Priya Dutt arrived before I could change from my work clothes to the formal ones to make an appearance.

But all’s well that ends well. By a stroke of synchronicity Aakif had invited Samina Naz, the Consul General of Bangladesh for the ceremony. Baba was born and grew up in Bangladesh so her presence seemed most appropriate. I requested her to say a few words and she graciously obliged. And then it turned into a garden party because the sign is actually part of a public garden in which we had laid out tables and chairs and an authentic Bengali high tea. Only when people left and the sign lights came on that the significance of the moment sank in. Bimal Roy Path was a reality at last. Isn’t it wonderful that both Ma and Baba have become a tangible part of Bandra’s history?