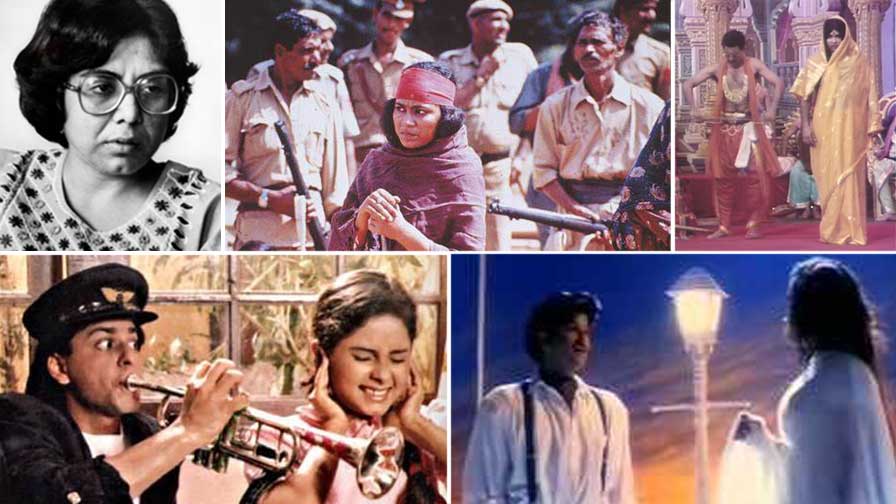 What’s common between Parinda and Ardh Satya? Or Jaane Bhi Do Yaaro and Hyderabad Blues, Pardes and 1942: A Love Story? Her name was Renu Saluja. Renu was the creative force behind at least a quarter of all “parallel” movies made in the 80s and 90s. As a point of fact, her roster as a film editor is more illustrious than many filmmakers. Like Naseeruddin Shah said at the launch of the aptly-named book on her called Invisible: The Art of Renu Saluja, “She was much more than an editor. She was a filmmaker.”

Renu Saluja is like a mythical figure who features prominently in any discussion around serious cinema in the 80s. She features in every book, every interview, every scrap of text ever written about those films and their makers. But she was on the sidelines of most of those stories. Everyone mentioned her, every anecdote featured her, but she never became as well-known as many of her collaborators. Film editing has never been a well-regarded craft in this country.

An editor is someone who translates the director’s vision to the screen, in effect almost “making” a film all over again. Satyajit Ray had once said, “Editing is the stage where a film really begins to come to life.” And yet, in the rich century-old history of cinema in this country, editors never became stars the way directors, music directors, lyricists, even some cinematographers did. For the most part, they remained obscure. Precious few would know or even care that Sholay was edited by M. S. Shinde, Mother India by Shamsudin Qadri, and Mughal-E-Azam by this gentleman named Dharamvir. Probably the only star editor the industry has seen was Hrishikesh Mukherjee, but that was more because of his successful shift to directing. Again, a lesser-known fact: the last film Hrishikesh Mukherjee edited was Manmohan Desai’s Coolie.

In this eclectic mix is thrown Renu Saluja. Unlike most of her male counterparts – she was likely India’s first female film editor – her work has been spoken and written about extensively. And yet, she remains a familiar name outside the fraternity only amongst film buffs. Renu has not only edited the likes of Albert Pinto ko Gussa Kyon Aata Hai, Jaane Bhi Do Yaaro, Ardh Satya, Parinda, she has also been instrumental in the making of many of these indie classics. One of the most pertinent examples is Jaane Bhi Do Yaaro. Renu had been involved since the time the film was a germ in Kundan Shah’s beautiful brain. Kundan was assisting Saeed Mirza on Albert Pinto and Renu was editing. This is when Kundan, Sudhir Mishra, Vidhu Vinod Chopra and his wife Renu Saluja started hanging out. At the pre-natal stage, it was Renu along with her husband who kept encouraging Kundan, listened to early narrations, gave constant feedback and brought co-writer Ranjit Kapoor on board.

Renu was present on the sets every single day, ensuring she never becomes a hindrance and helping out wherever she could. She even played a cameo as one of the burqa-clad women whose veil Pankaj Kapur lifts if she were the dead Demello and gets a resounding slap in return. When there were doubts over Pankaj’s suitability of playing a man older than he was, it was Renu who went out looking for glasses for him. But on top of all that, she came in with a certain amount of smarts as an editor, which helped the film immensely. As Naseer liked to say, the amount of footage that was discarded would have made a whole other film! Renu was also credited as assistant director on Jaane Bhi Do Yaaro. She continued the practice of going to sets every day for most of the projects. Saeed Mirza used to shoot at places like Dongri, Kamathipura and Nagpada where they were constantly surrounded by tough men and often anti-social elements. But Renu didn’t once flinch. She wasn’t scared or intimidated by anyone, nor did she look down upon any of them.

A film’s raw footage can often appear messy and disjointed. The editor’s impact on this kind of material is quite magical. She can transform it into a timeless classic. Vidhu Vinod Chopra said during an interview: “Some films I saw before they were cut and after they were cut. A film like Bandit Queen, I saw the five-hour thing and I thought it was okay. It made no impression on me. Ardh Satya made no impression on me, when it was at that stage. Her contribution was absolutely immense. I think she put those films where they deserved to be. She was very good at what she was doing, because that’s what she was living for.”

While reminiscing about her in Invisible: The Art of Renu Saluja, Om Puri wrote, “She once complained that we actors had no sense of continuity and that she had a tough time whilst editing Jaane Bhi Do Yaaro. I murmured sheepishly that we were new then.” Renu Saluja had received the National Film Award for editing not once or twice, but four times:  for Parinda, Dharavi, Sardar and Godmother. Interestingly, when it all started, Renu was a staunch mainstream film fan, listening to Hindi songs constantly and playing Antakshari all the time. She followed her sister to FTII. He sister Radha Saluja was an actress, having worked in films like Haar Jeet (1972), Ek mutthi Aasmaan (1973), and Aaj Ki Taaza Khabar (1973). Contrary to popular perception, Renu’s first credit in Hindi films was as an assistant director on Aaj ki Taaza Khabar, much before she went to FTII. It was her intention at this point to learn film direction. But she couldn’t be accommodated in the direction course and ended up enrolling for the editing course. By the time she graduated, the scenario in Hindi cinema was in for major overhaul. While the old guard still remained, a whole new generation came into the movies hoping to change it for the better.

Another great legacy of Renu Saluja lies in the stardom of Shah Rukh Khan. When Shah Rukh was at the very beginning of his career and scouting for work, it was Renu who spotted the talent in this boy on seeing his TV serial Fauji and kept recommending him to everyone she knew. Everyone including Ketan Mehta, Kundan Shah and Aziz Mirza had considered Shah Rukh for their films because, among other things, it was the great Renu Saluja who was recommending. Shah Rukh was flabbergasted with this name he kept hearing. Who was Renu? He didn’t know her. Many years later they might have encountered each other on the sets of Pardes. But Shah Rukh regretted not taking out the time to spend more time with her, get to know this incredible woman who kept asking everyone around them to bet on a newcomer who she didn’t even know personally.

When she passed away due to cancer at just 48, Renu Saluja left broken hearts and classic films in her wake. It’s been 22 years since her demise, and it’s high time she is recognized for the legend that she truly was.

Amborish Roychoudhury is the winner of the 2019 National Film Award for the Best Book on Cinema, namely, 'In A Cult of Their Own: Bollywood Beyond Box Office'. He is presently writing the authorised biography of Raj Khosla. Additionally, he writes for First Print and Mubi. | http://amborish.com