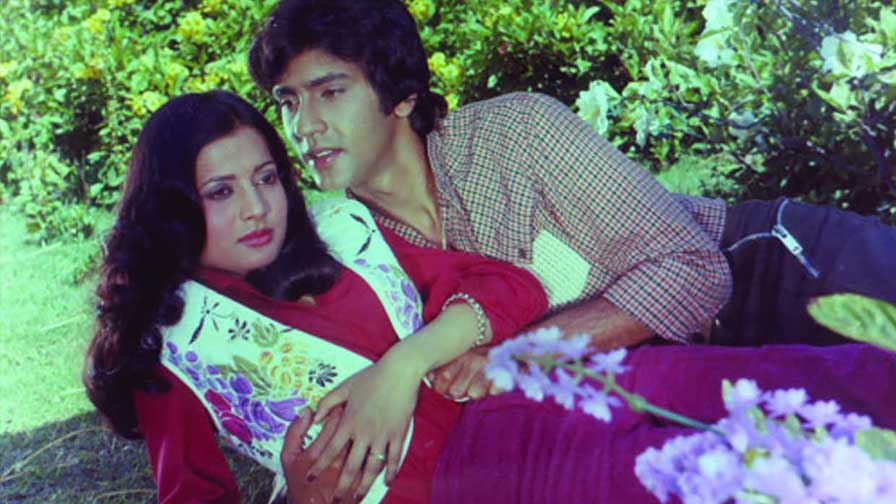 Hindi Film world is a huge store house of love stories i.e films. But only a few films, especially love stories, had made lasting impression upon the viewers and one fine day they receive the title of cult film. Love Story, released on February 26, 1981, is a movie without a director’s name. Hindi films that were released that year and achieved unprecedented commercial success were Nasib, Lawaris, Ek Duje Ke Liye, Kranti and Love Story. Among the films from the directors like Manmohan Desai, Prakash Mehra, Manoj Kumar, K Bishwanath, and others, a film by a young director whose two main characters were brand new faces, and that shined it its own way- was a remarkable happening of that year. What was in that movie? What was special in it? What was the [highlight background=”#f79126″ color=”#ffffff”]signature of director Rahul Rawal,[/highlight] even though he was not named in the film, he is known only by this film?

One of the major key elements of a love story is the obstacle between the lovers, which can be economic, caste differences, language gaps, etc. In Shakespeare’s Romeo and Juliet, the obstacle between the loving couple was the egoistic problems of the parents and this gap and animosity deepens the crisis of the love story. This feature of Romeo and Juliet has been widely adopted by Mirza Brothers, the author of Love story, and Rahul Rawal, the director.

Vijay Mehra [Rajendra Kumar] is a wealthy builder who loves Sumon [Vidya Sinha]. On the other hand, Ram Dogra [Danny], a college friend of the engineer, also likes Sumon. Vijay wants to bribe in the interest of business. After this only, he comes to know about the love affair of  Ram and Suman. Eventually, Sumon and Ram get married, and a daughter is born, named Pinky (Vijayeta)

Vijay too gets married. But his wife dies after giving birth to their son. Vijay brings up his son Bunty with utmost love and care. After many years, Pinky and Bunty suddenly face each other and needless to say, that meet was not pleasant. Bunty wanted to be a pilot, but his father wanted him to be a builder. Pinky’s father wants her to get married  but she does not want to. This is the reason why both of them run away from their homes. Havaldar Shwer Singh [Amjad Khan]  arrests them and drags them with the same handcuff. It is in this twist that the love between the two develops.

But the story does not proceed so smoothly. Ram Dogra enters to the scene. He never allows Pinky to get married with Bunty. So both of them run away again. This time they encounter some robbers. After many incidents, Bunty saves Pinky from the brink of death and finally the two love birds reunite.

The main inspiration of the story is undoubtedly Romeo and Juliet. Raj Kapoor’s ‘Bobby’ seems to have a small impact on the teen’s love story. For example, in the song “Kya gajab karte ho ji”, the way Aruna Irani  irritates the teen Kumar Gaurav is somewhat similar  to the way  Rishi Kapoor was  instigated by  the same Aruna Irani in “Bobby.” Rahul Rawal learned film making as an assistant to Raj Kapoor. Raj Kapoor has a reputation for portraying the physical beauty of his heroine-actress, but that style has not impressed Rahul Rawal at all. He has portrayed the actress in a beautiful way, but has never unclothed them to expose their beauty. Rahulji told, the film is slightly influenced by the English film ‘The Defined Ones’. The handcuff element is taken from this picture.

Raj Kapoor had picturised each and every shot with utmost care and tried to make all the shots look beautiful. Rahul Rawal also has that quality like his Guru, but, his shots are more beautiful from the point of view of composition, he is always aware of the vastness of the wide frame and the overall beauty of the whole frame. The location of the song ‘Kya Gajab Karte Ho Ji’ was a small room, but the articulate camera work has kept the small look of the room intact. Radhu Karmakar, the cameraman of this film, who was the cameraman of a number of films of Raj kapoor. Surprisingly, the technique or beauty of Raj Kapoor’s shot composition were not seen in Love story. Rahul Rawal, a new and young director, deserve appreciation for being able to come up with his own style even working with a veteran like Radhu Karmakar.

[highlight background=”#f79126″ color=”#ffffff”]Rahul Rawal’s specialty was to adorn the film with his own aesthetic skills,[/highlight] ignoring the prevailing notions. The name Love Story evokes a kind of poetic tone and the director was keen to preserve that tone and mood throughout the film. The design of the poster, the style of writing the title, the credit title all have its mark. Another example that supports this comment is the scene of a Bunty, aspiring to become a pilot, playing with a herd of sheep seen at the bottom of a small plane. The description of the scene was not common, it was not dramatic, it was poetic. And in that poem there was a kind of loneliness and sadness This sadness, however, is flowing in a very subtle way in the whole film. Such poetic depiction was not found in the major mainstream films of that time. Even later, Rahul Rawal’s harsh and rude reality based films like ‘Dakait’ and ‘Arjun’ were a continuation of the poetic beauty of the loneliness and the elegant picturisation. Rahul Rawal and especially Love Story, are still relevant today because of the creativity shown in making a mainstream commercial film, a sensitive work of cinematic art.

Sadly, [highlight background=”#f79126″ color=”#ffffff”]the identity of Rahul Rawal was not engraved on the body of the film in which he was established.[/highlight] There are many stories of confrontation between producers and directors, but omitting the name of the director seems to be the lowest level of this work. In a conversation, Rahul Rawal said that he himself had withdrawn the name from the picture. In response to a question about “did you get the director’s honor”, he said, Love Story was one of the most successful films of that year, a major hit. But I got very little remuneration, after a long court appearance.

Although not mentioned in the film, today is Rahul Rawal’s second identity as a film director is associated with a movie called ‘Love Story’.